In this lesson, you’ll learn about force-sensitive resistors (FSRs) and how to use FSRs and two-legged variable resistors more generally with microcontrollers. We’ll conclude with building a “force-sensitive” musical instrument—very Jedi-like!

This lesson directly builds on the prior one (potentiometers), so definitely complete that first.

Force-sensing (or force-sensitive) resistors (FSRs) are two-legged variable resistors that decrease in resistance with an increase in applied force.

FSRs can differ in size, shape, and force sensing sensitivity. There are a variety form factors, including square and circular (which host the active sensor area). In our hardware kits, we typically purchase and provide the popular Interlink FSR 402 (either from Sparkfun or Adafruit), which is the product in the upper-left below. 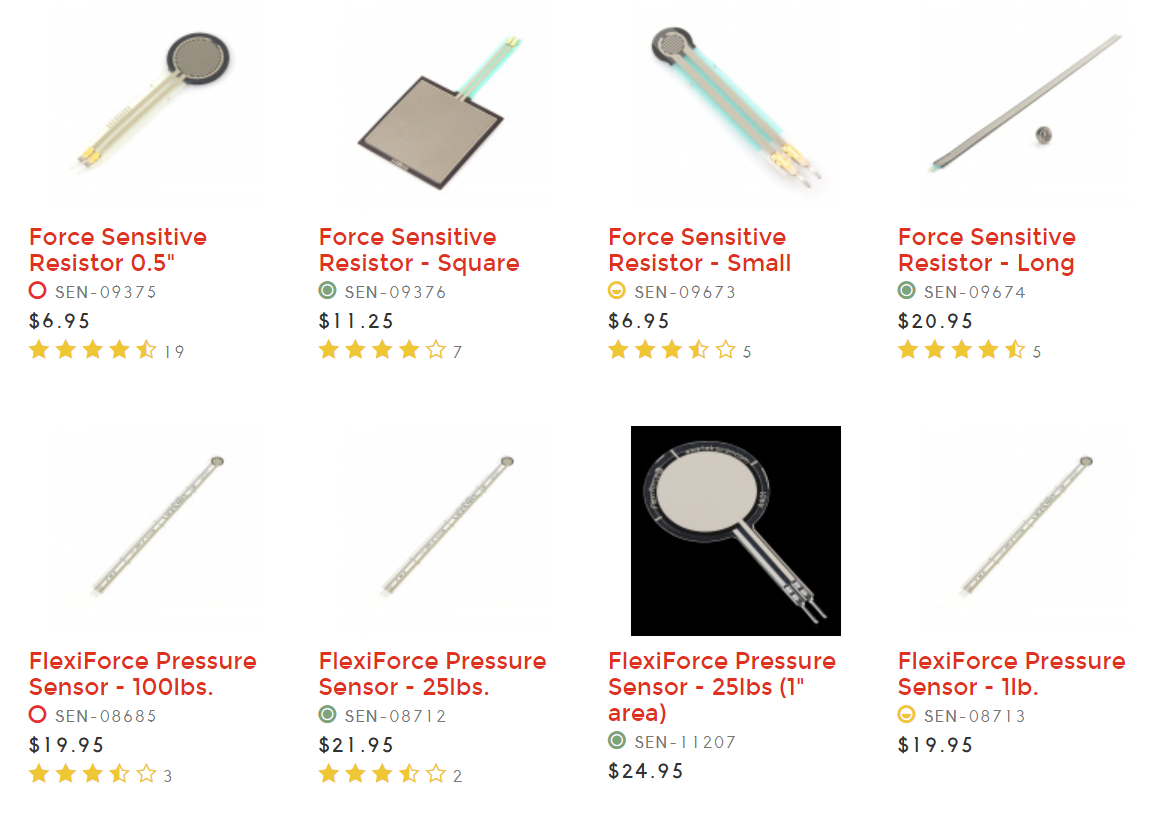 Prices and products from Sparkfun.com

What can we do with FSRs?

The FSR 402 datasheet describes a number of example applications, including:

While FSRs respond to force, they are not precision measurement instruments like load cells or strain gauges, so use those if you want to precisely measure weight, load, or strain.

How do FSRs work?

How do FSRs actually work? Their construction is quite simple. There are three layers: the top and bottom layers are conductive and the middle layer provides a “thin air gap” that separates the two. When the two conductive layers are pressed together, electrical pathways are made. The harder you press, the more connections. And the more connections, the less resistance. See the FSR construction diagram from Interlink below: 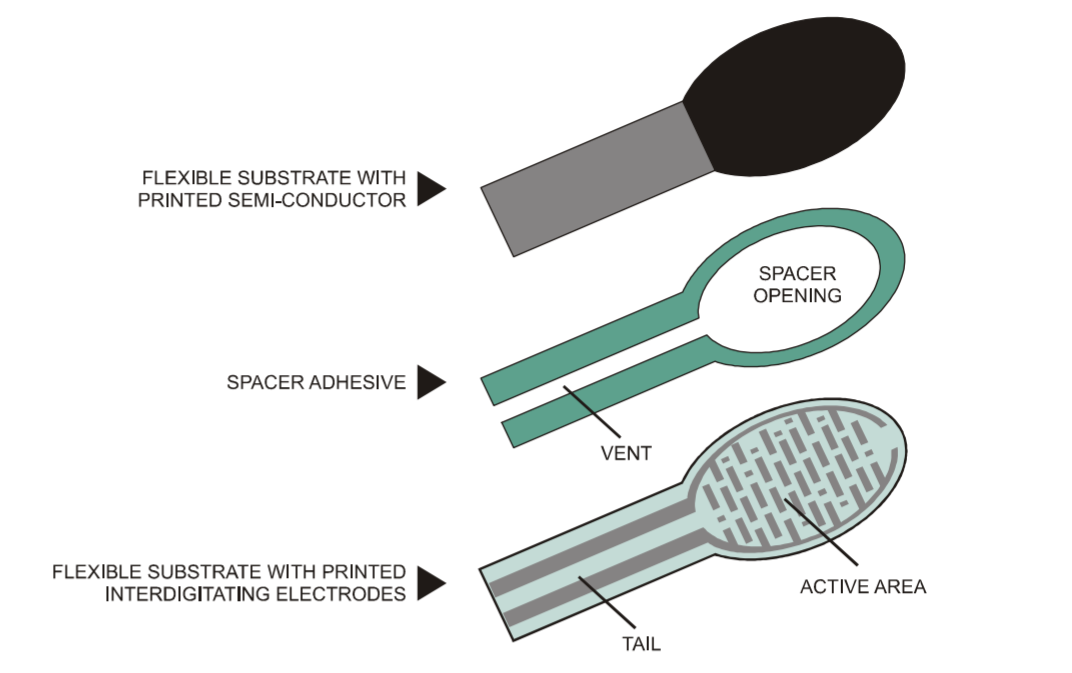 So, what exactly is the relationship between an FSR’s resistance and an applied force?

A graph of the force (g) vs. resistance (kΩ) of the FSR 402 is shown below (plotted on a log-log scale). As can be observed from the graph, the FSR has two response phases:

At the high-end of the force range (greater than 1000g), the FSR saturates and does not continue to drop resistance. 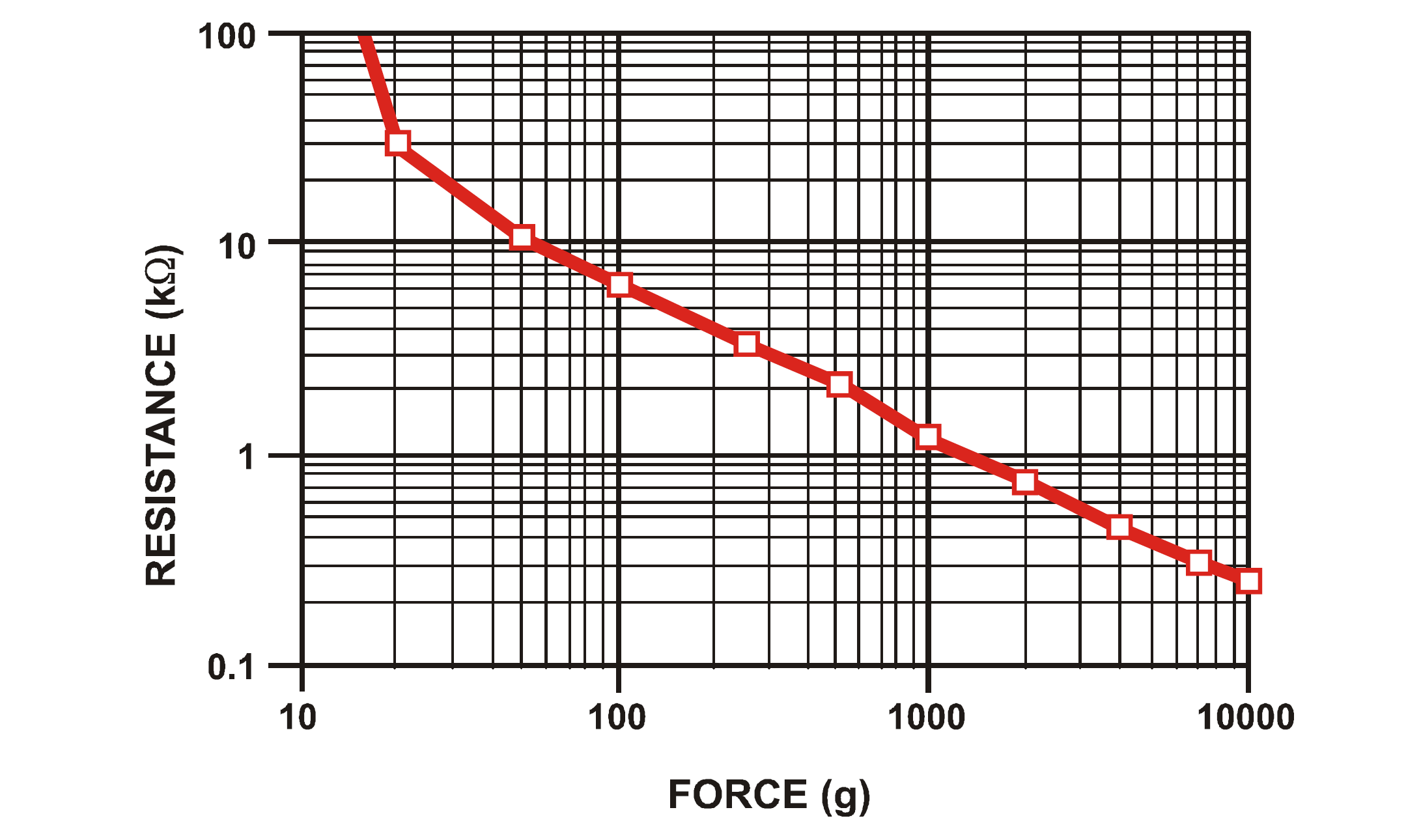 Making an LED dimmer with an FSR

To begin, just like we did with the buttons and potentiometers lessons, we’ll make a simple LED circuit without a microcontroller. In fact, this circuit will be the exact same as the “rheostat” potentiometer circuit here (but we’ll replace the rheostat with an FSR).

Below, we show two possible wiring diagrams: the first (preferred) shows the FSR circuit powered by a 9V battery while the second shows power derived from the 5V and GND pins on the Arduino. (Again, we prefer the former just to further emphasize that at this point, we’re not using microcontrollers!) 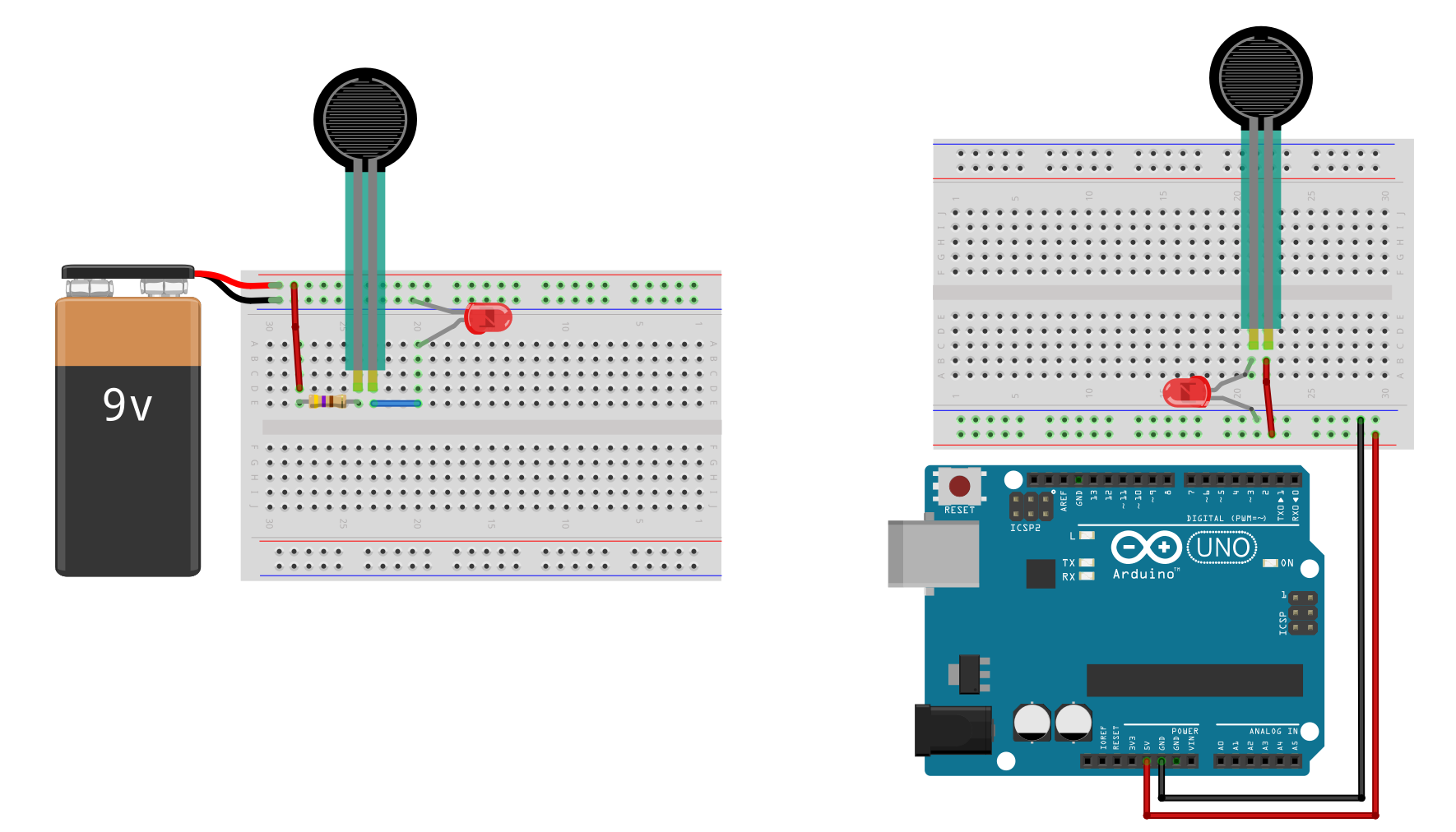 Two wiring options of an FSR using a breadboard. Like typical resistors, FSRs can be inserted into your circuits in either direction.

With the 9V wiring, we include a backup resistor; however, with the 5V wiring (with Arduino), we do not. This is because both the FSR 402 datasheet and our own empirical use demonstrate that even with significant force (roughly 1,000g according to the datasheet), the FSR still has ~200Ω-500Ω of resistance. So, while a potentiometer may drop to 0Ω at the lowest setting, the FSR does not, and thus does not require a backup resistor.

The two contact legs are 2.54mm apart (0.1”), so should fit snugly into your breadboard. Just like a traditional resistor, the FSR can be inserted in either direction.

If you want a more permanent connection, see this fantastic guide from Sparkfun on soldering FSRs (difficult) or using Amphenol FCI Clinchers (recommended): 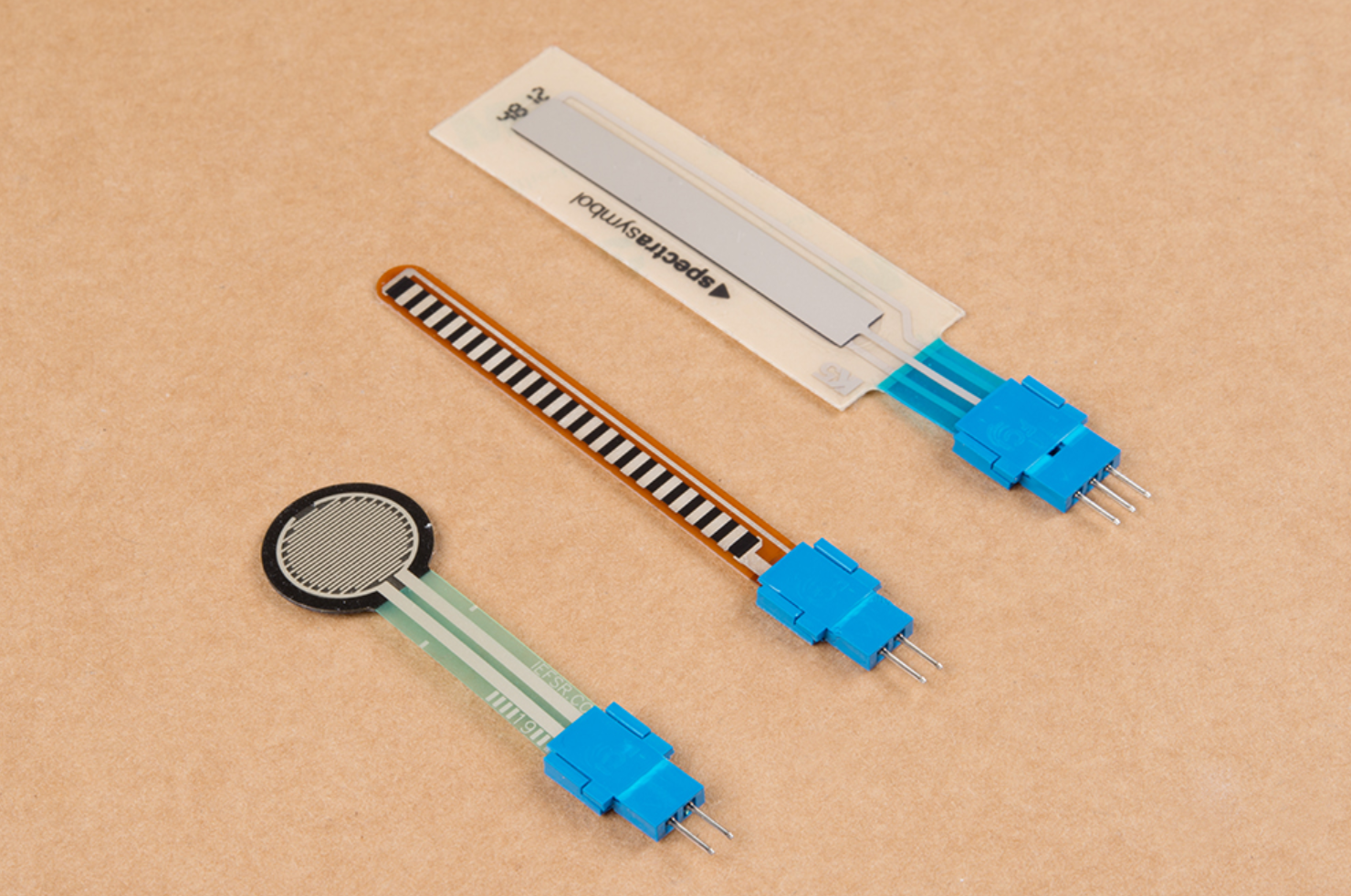 Once you’ve made the circuit, have fun playing with the FSR. Get a sense of its responsiveness and how hard you have to press.

Here’s a workbench video of our completed circuit (this is the same video as the one in the potentiometers lesson, so there is a backup resistor):

First, like usual, we’ll show you the wrong way to hook up a component to a microcontroller: 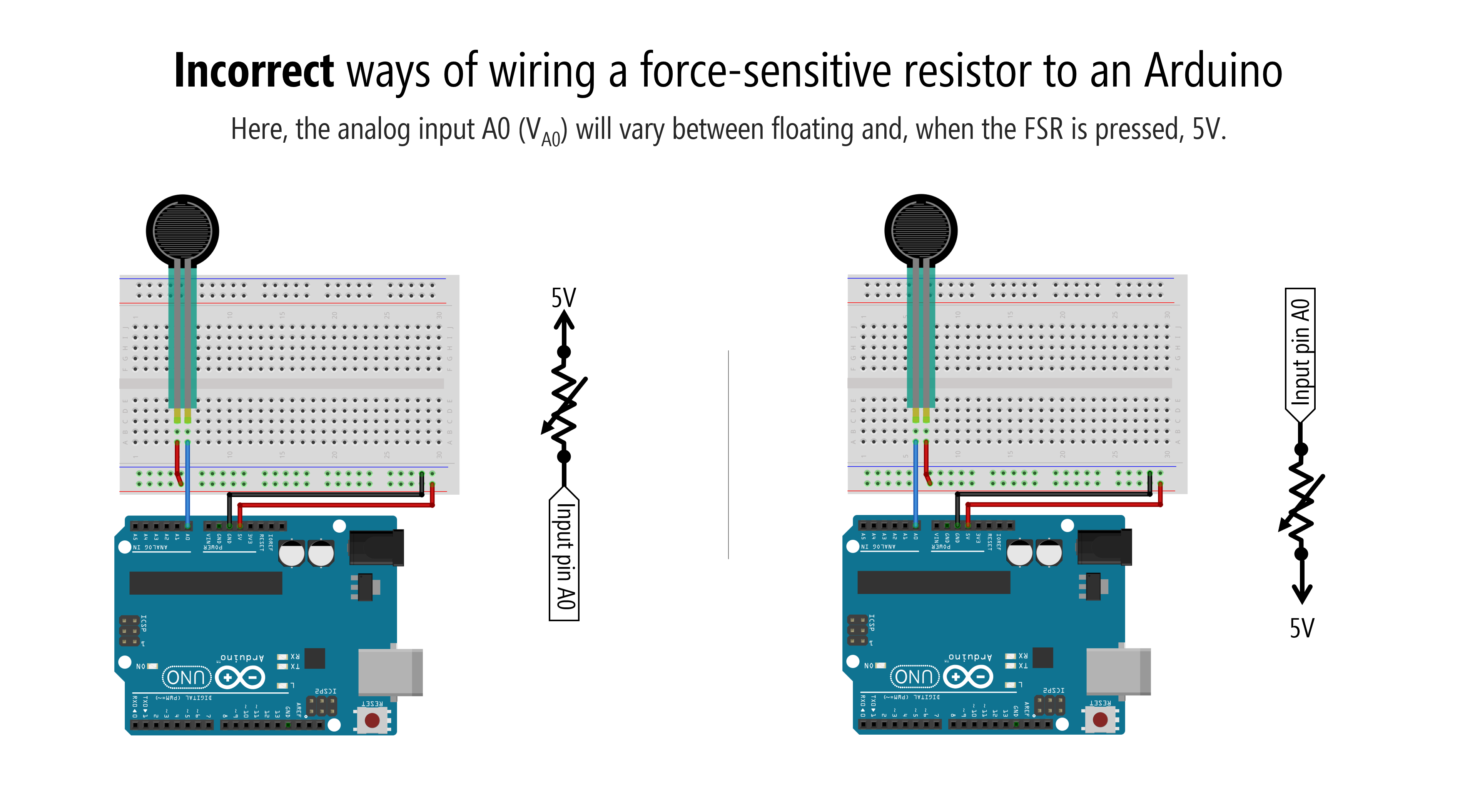 Why doesn’t this work?

Recall from our potentiometers lesson, microcontrollers read voltages, not current. We have to setup a circuit that enables our microcontroller to “see” changes in voltages.

To use an FSR—or any variable resistor—with a microcontroller, you must add a fixed resistor to form a voltage divider like this: 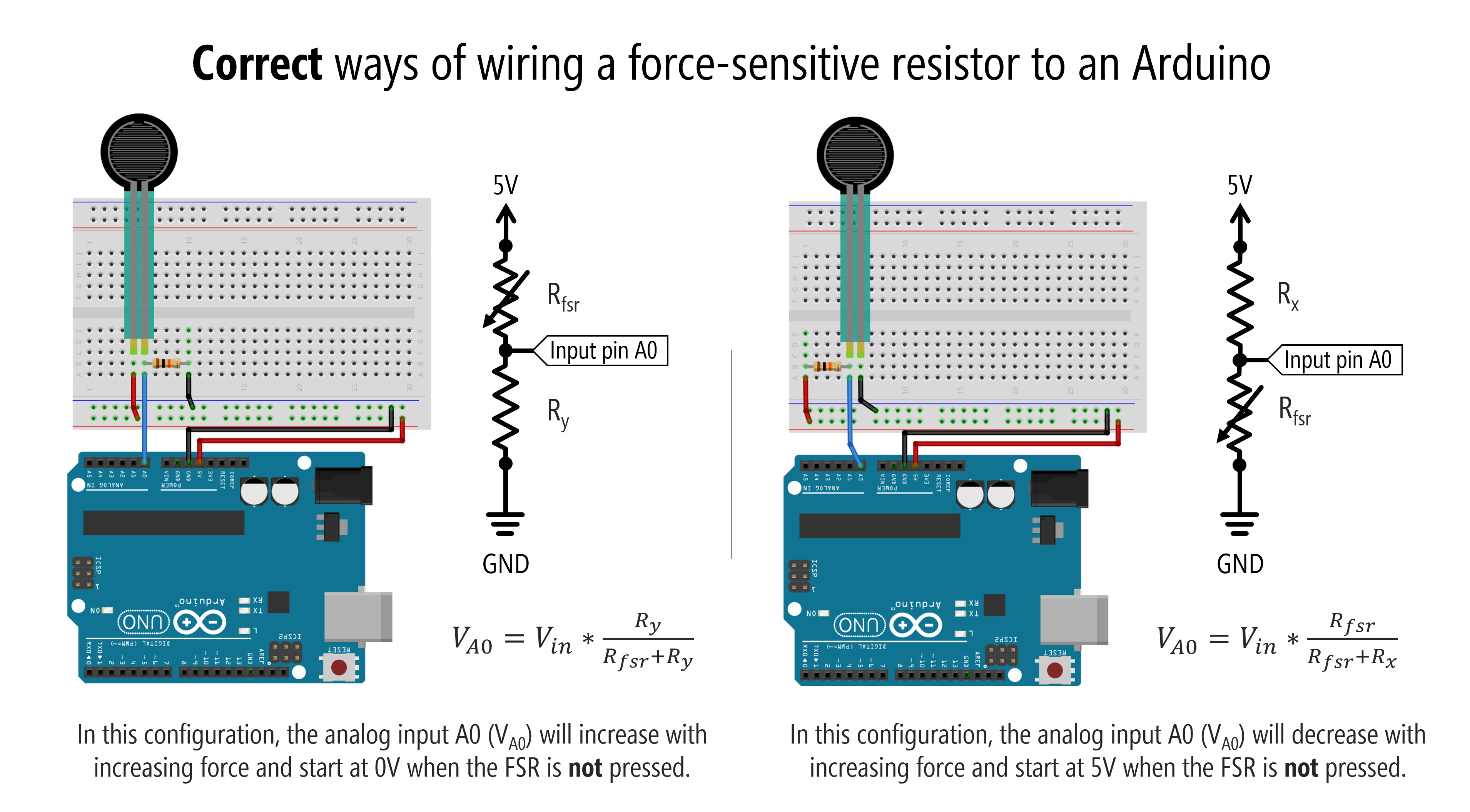 That fixed resistor is like hooking up the third leg of a potentiometer. It’s also similar to the pull-up or pull-down resistors for our switch circuits (and, indeed, when the FSR is not pressed, it acts like an open switch because its resistance is so high).

How to select the fixed resistor

But how do we know what value to select for this fixed resistor? To the datasheets!

The Interlink FSR Integration Guide suggests choosing the fixed resistor (which it calls \(R_M\)) based on your specific use context to maximize the desired force sensitivity range and to limit current.

The guide provides a useful force vs. \(V_{out}\) graph with different fixed resistor values (\(R_M\)). As can be observed from the graph, selecting a 10kΩ resistor for \(R_M\) provides the most dynamic \(V_{out}\) range for the full sensing force range of the FSR. Note also the two-phase relationship with the initial steep slope followed by a softer increase.

In general, for a resistive sensor like an FSR, read the datasheet (of course) but also play around with the sensor. Start with a 10kΩ fixed resistor, write a simple Arduino program to graph its analog input in response to various stimuli (in this case, force), and go from there.

We’re going to begin with a simple circuit to read the FSR and proportionally set the Arduino’s built-in LED brightness. We’ll also graph the FSR input using the Arduino IDE’s Serial Plotter. Then, we’ll conclude with the Jedi-force “instrument.” For both constructions, try to make the circuit and write the code before looking at our solutions. You can do it!

Let’s make a simple FSR circuit with the fixed resistor (10kΩ) in the pull-down position. In this configuration, the analog input A0 (VA0) will increase with increasing force and start at 0V when the FSR is not pressed. 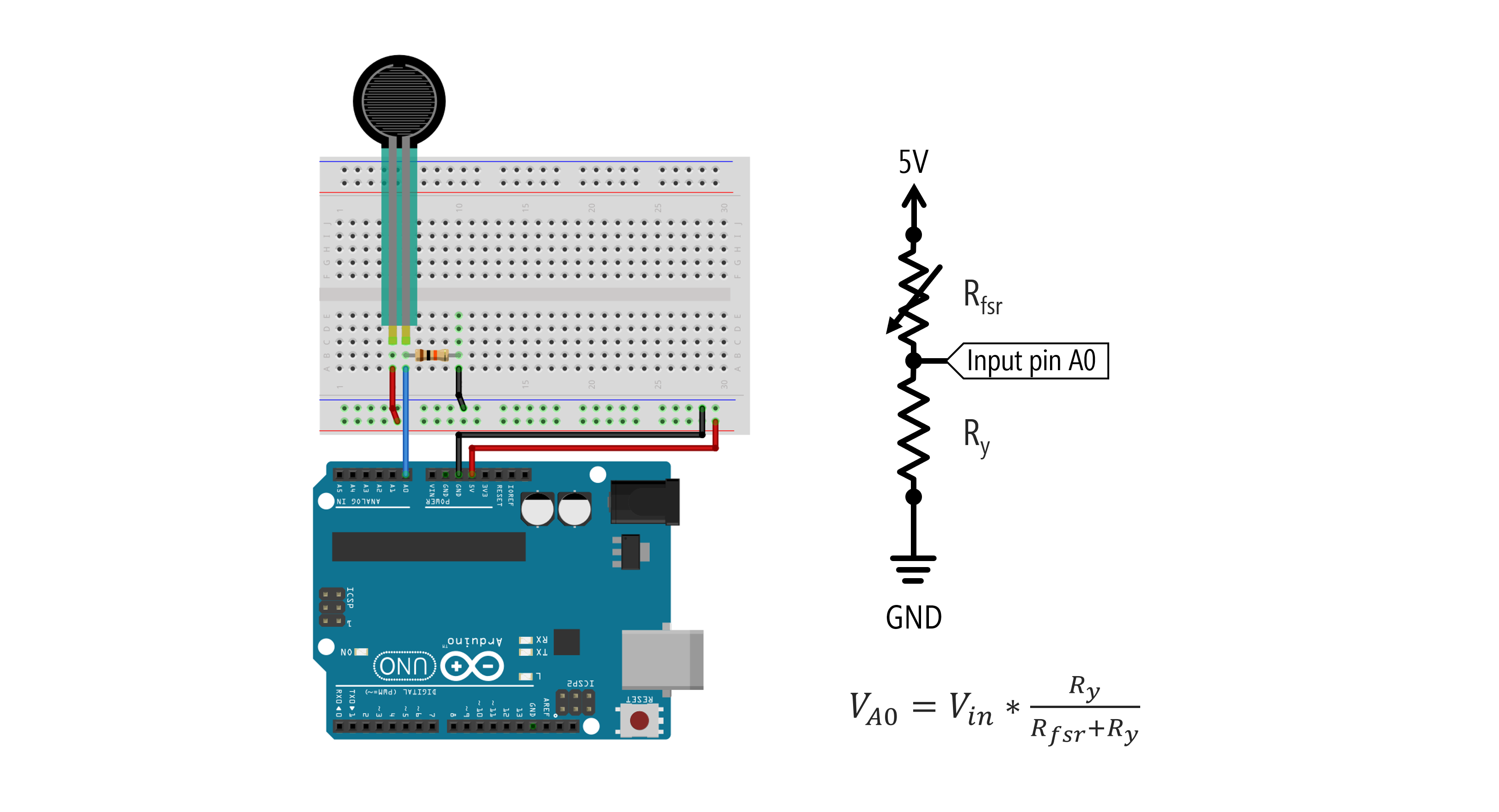 For our FSR-based LED fade code, we’re going to read in the FSR value from the voltage divider using analogRead and then use this to proportionally set our LED brightness using analogWrite. Easy, right?

If, instead, we can’t assume that both ranges start at zero, the more general conversion algorithm is: int outputVal = OUTPUT_MIN + (inputVal - INPUT_MIN)/(INPUT_MAX - INPUT_MIN) * (OUTPUT_MAX - OUTPUT_MIN); This type of range conversion is so common that Arduino (and Processing and many other programming libraries) have a built-in function for it called map. It’s called “map” because we want to re-map a number from one range to another. Indeed, here’s the entire map function from the Arduino source code:

Importantly, as the docs make abundantly clear, notice that this built-in method using integer math and so will not return fractions (floats). If you need more precise conversions, implement your own mapping function (which also provides the opportunity to implement non-linear conversions like logarithmic mappings).

OK, now that we have that out of the way, let’s write our code!

Here’s a workbench video with a corresponding Serial Plotter screen recording. The analogRead FSR values are in blue, the analogWrite LED PWM values are in orange. We’re using the built-in LED, so the LED brightness changes may be difficult to see in the video.

For our final creation, we’re going to make a Jedi force instrument: the harder you press on the FSR, the higher the frequency we play on the piezo. Again, try making this yourself without looking at our circuit or code.

Simply add in a piezo buzzer and connect it to a GPIO pin. 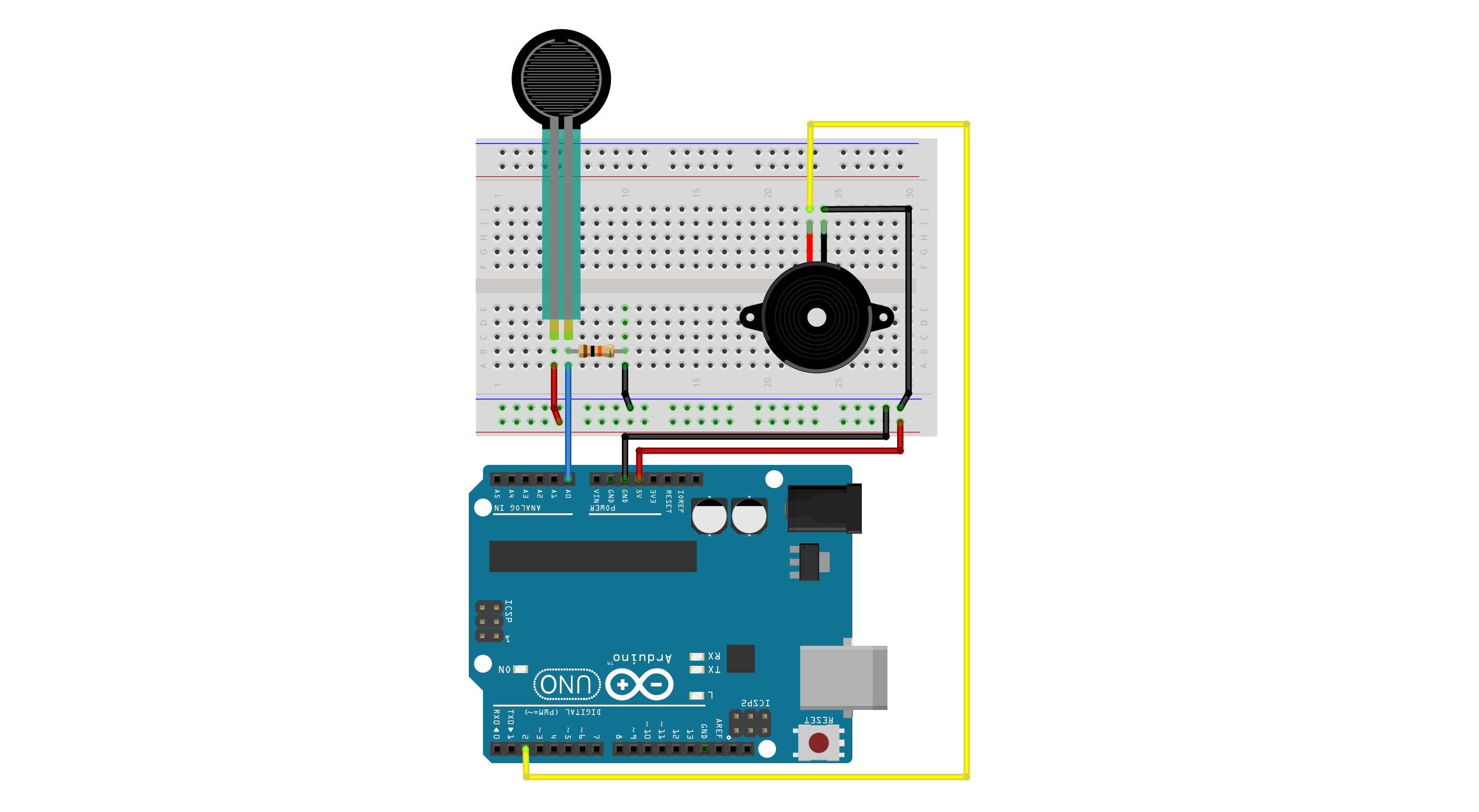 In our code, we only play sound when the FSR is pressed (to limit the annoyance). :)

Here’s our take on it! Make sure to have your sound on (or not) if you want to hear the piezo buzzer!

For your prototyping journals, choose of the following extensions and implement it!