In previous lessons, you learned about the concept of resistance, Ohm’s Law—how voltage, current, and resistance relate together—as well as series and parallel resistor configurations. In this lesson, we will expand on how resistors work, how they’re characterized in terms of both resistance \(R\) and power \(P\), and how to “read” them.

Figure. The above image shows a variety of resistor types from \(\frac{1}{4}W\) to \(5W\) resistors. I no longer have the source for the original image. Annotations made by Jon Froehlich in PowerPoint.

How do resistors work?

Figure. This animation shows how a resistor can be placed between two wires to reduce current flow. Notice how electrons flow freely through the copper wire. With the resistor, these electrons “collide” with other atoms and themselves, which transforms the electrical energy to thermal energy and induces a voltage drop. Animation from The Engineering Mindset.

In a resistor, flowing electrons collide with atoms making them vibrate, which converts electrical energy to heat energy and induces a voltage drop \(V\). The amount by which a resistor resists the flow of charge is called its resistance \(R\) and is measured in Ohms (Ω). The amount of voltage drop over a resistor is captured by Ohm’s Law: \(V = I * R\).

As noted in Lesson 1, some materials like metals—silver, copper, and gold—have low resistances. Other materials such as glass, rubber, and air have high resistance and poor conductivity (“low electron mobility”)—these materials are called insulators.

A common confusion is that resistors only reduce current at the resistors themselves or that resistors are like a traffic jam, slowing “traffic” (electrons) before the resistor but then the electrons (cars) “can pick up the pace” again after getting through the jam (the resistor). No, this is not correct!

Resistors restrict the flow of electrons throughout a circuit path. Think of a small valve in a water pipe: this valve restricts the total water flow through the pipe—both before and after the valve. The animation below shows three simple circuits with different amounts of resistance: notice how the current flow is the same throughout each circuit, it is not faster or slower before or after a resistor.

Video. In the animation above, we are showing how current is the same for each individual circuit. It does not speed up before or after a resistor. Animations made in CircuitJS (left, middle, right)

How are resistors made?

Figure. Image from Sparkfun.com with annotations by Jon Froehlich.

Depending on their type and manufacturing, resistors have a certain “accuracy” tolerance. For example a 100Ω resistor with a ±5% tolerance could be, in actuality, a 95Ω or 105Ω resistor.

Resistors are characterized according to their resistance value (in Ohms or Ω) and maximum power capacity (in Watts), which is the maximum rate at which they can convert electrical energy to thermal energy (heat). We’ve previously described resistance but what do we mean by power capacity?

What is electrical power?

Electric power—just like mechanical power—is the rate of doing work. The power \(P\) at a circuit element is a measure of how quickly it converts energy: a battery converts chemical potential energy to electrical energy (producing power), a resistor converts electrical energy to heat energy (absorbing power). Due to the conservation of energy, the total power delivered in a circuit is equal to the total power absorbed. The SI unit of power is the watt, one joule per second (\(\frac{J}{s}\)).

The amount of power \(P\) absorbed at a circuit element is dependent on both voltage and current:

But the most critical thing to understand and remember is \(P=V * I\)!

Calculating the power dissipation of a resistor

While \(P\) is defined as \(P=V * I\), we can use Ohm’s Law and simple substitution to derive two other formulations:

What if the maximum power capacity is exceeded?

If we exceed a resistor’s power capacity, it will begin to heat up and eventually burn out. Once a resistor “burns out”, it typically creates an “open circuit”—that is, current will no longer travel through that path (air is a good insulator).

Figure. Resistors are made of materials that cause electron collisions with atoms, generating heat. Resistors have “power ratings” that, when exceeded, can heat up too much and burn out (left image). If you overpower your resistor, it could burn you—be careful. On the right image, a Reddit user posted their resistor burn imprint on their finger. Image on left from this Being Engineers video and image on the right from the Electrical Engineering sub-reddit by user Xil0Sil0 (link)

Notably, I’ve never had a resistor start on fire or burn up (though I have had them heat up to the point in which they are “hot to the touch”). If you smell something burning, immediately unplug your power supply.

There are three ways to “read” resistors: (1) keep them arranged in pre-labeled packs (sidestepping the problem a bit); (2) learn how to decode the color-coded bands; or (3) use a multimeter on the “read resistance” setting.

In our prototyping classes, we tend to purchase \(\frac{1}{4}W\) resistor kits, which come with a set of resistors organized by resistance value and labeled (though you pay more per resistor for the convenience). 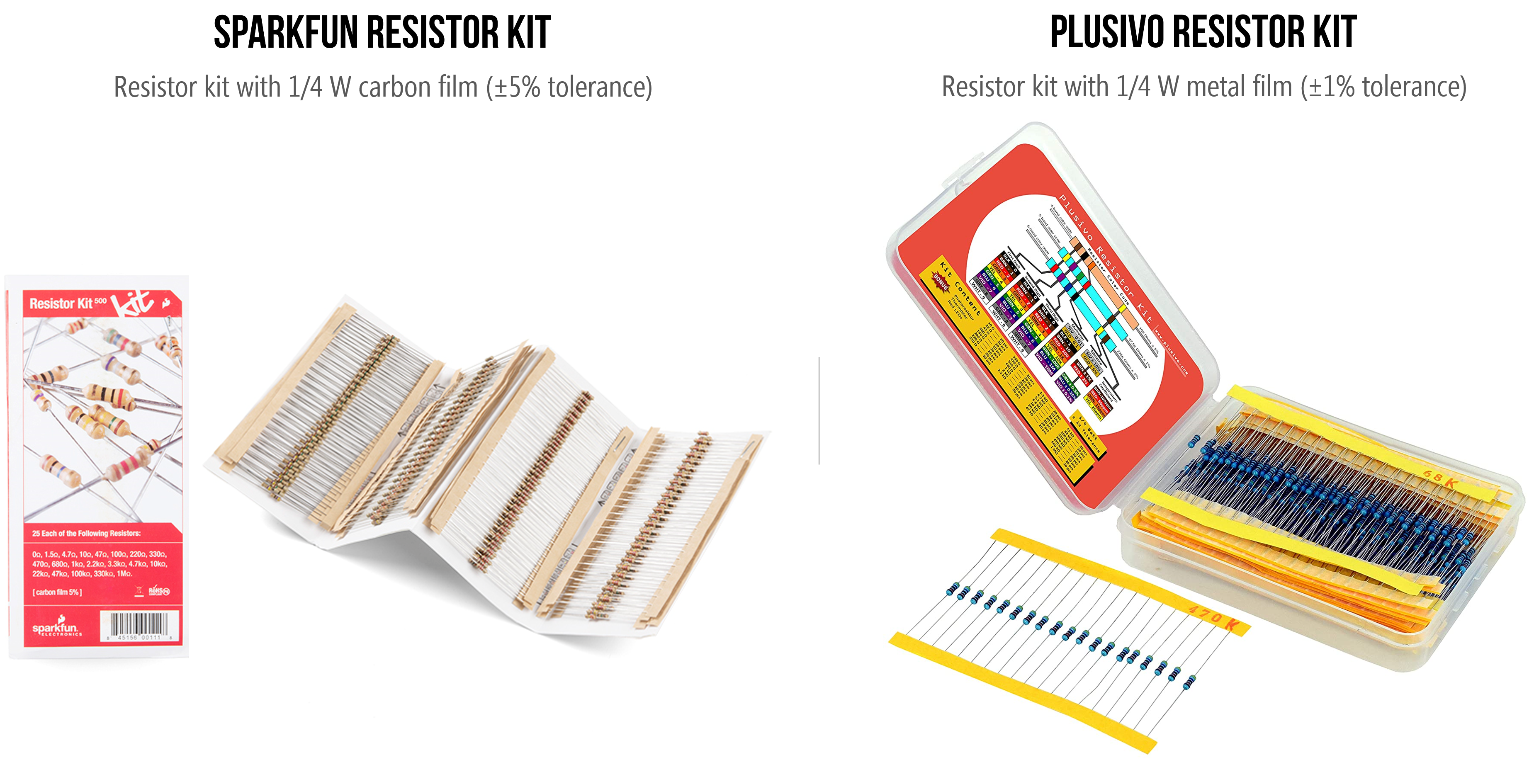 If you don’t have your resistors pre-labeled in a pack, you’ll need a method to determine their resistance value. Unfortunately, unlike capacitors, resistors do not have textual labels printed on them. Instead, they use a color coding system that has long been standardized but is a bit arcane (and not particularly accessible to people with color vision deficiency).

But knowing how to read these color bands is a nice skill for any prototyper, even if you do not memorize the color legend (I tend to look back at a reference, even now!). 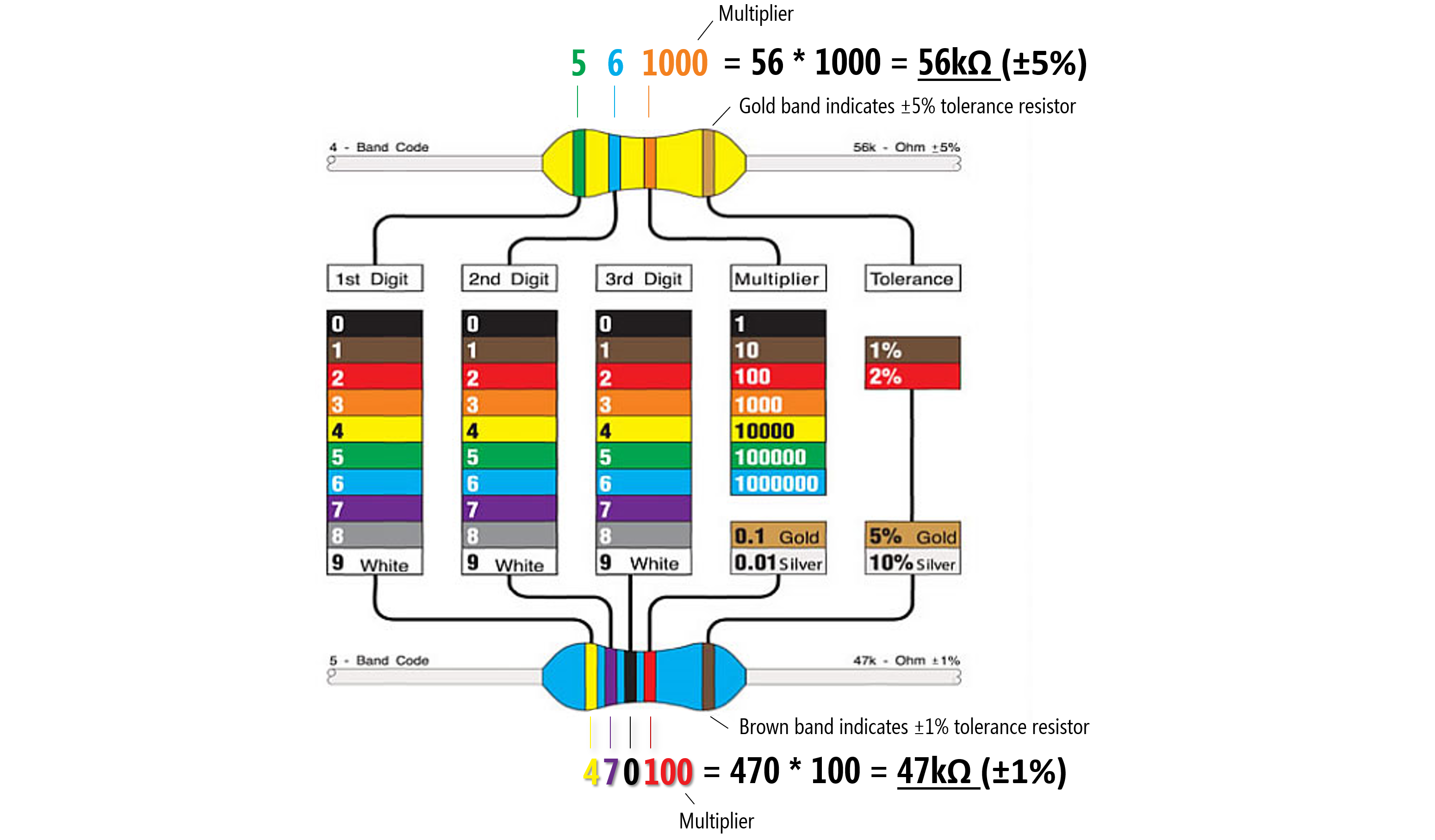 To read the resistor color bands, orient the resistor such that the “tolerance” band (e.g., the gold band for tan resistors or a brown band for blue resistors) is on the right. Then you read the color bands left-to-right based on the color chart below. Notably, the color band just before the tolerance band is a multiplier and the preceding bands are digit bands that tell you what to multiply.

In the video below, I slowly walk through how to decode the color bands on resistors with some examples. Then I show how to use a multimeter to read the resistance values directly. Hopefully, this will make things clearer.

Video A video tutorial of how to decode the resistor color codes and how to “read” a resistor’s value using a multimeter.

For your learning activity, pick out three different resistors from your kits. In your prototyping journals, for each selected resistor, take a picture, write down the color bands, and then manually calculate the resistance (showing your work). In the Plusivo kits, the resistors come in labeled strips, which you can use to check your work (ground truth!) or, if you have access to a multimeter, you could do that too. If you do use a multimeter, do you notice any differences between the color-coded value and the measured resistance in practice? Why do you think this might be? 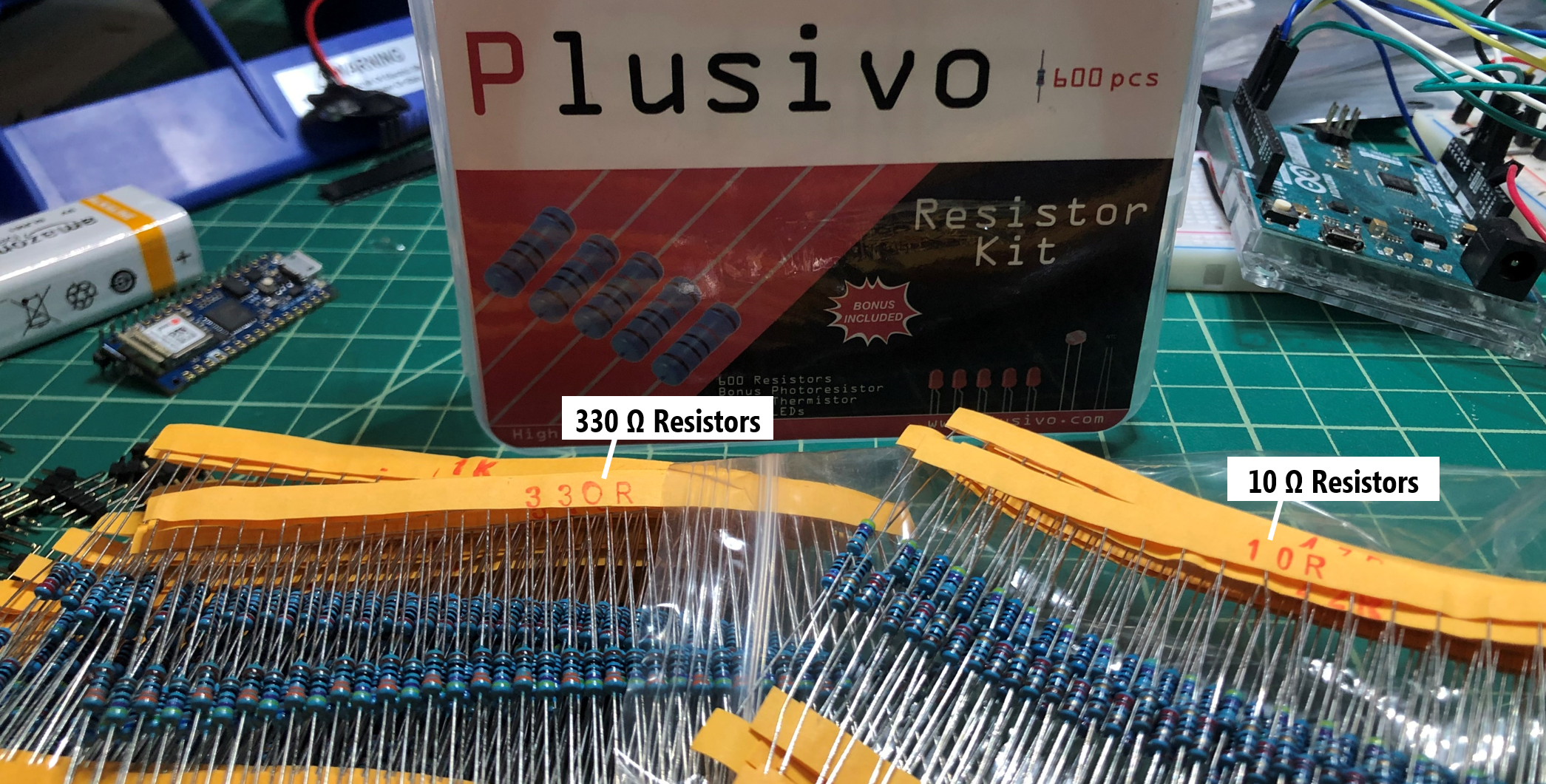 In the next lesson, we will learn about light-emitting diodes and how to use them.