In previous lessons, we worked with fixed-value resistors. In this lesson, we’ll learn about variable resistors—resistors that change their resistance based in response to some physical input (like potentiometers) or environmental input like thermistors (temperature), force-sensitive resistors (force), or photo-sensitive resistors (light). We’ve listed some examples below. 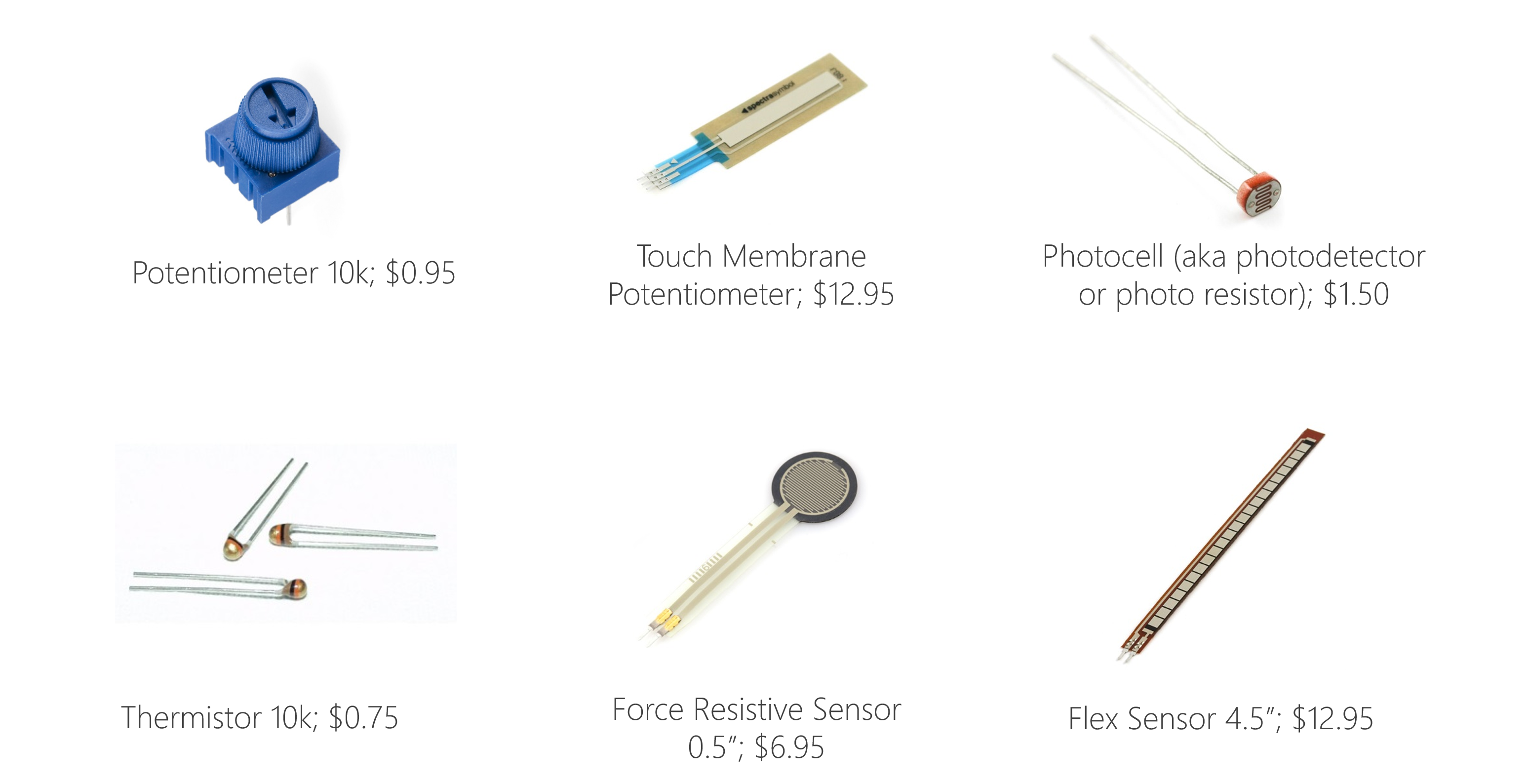 Figure. Many common sensors are actually variable resistors—they dynamically change their resistance in response to some human or environmental input. For example, thermistors change their resistance based on temperature, photocells based on light, force-sensitive resistors (FSRs) based on force. In fact, you have thermistors, photocells, and FSRs in your hardware kits! Prices and pictures are from Sparkfun.com; parts can often be cheaper in bulk from suppliers like Digi-Key or Mouser Electronics.

This is exciting! Physical computing is all about interaction and resistive materials that respond to different stimuli open up a new world of possibilities!

There are two-leg (or “two-terminal” or “two-lead”) variable resistors like rheostats, photocells, and force-sensitive resistors and there are three-leg variable resistors, which are called potentiometers. Both types are orientation agnostic—just like regular resistors, they will work in either direction (non-polarized). See schematic symbols below.

Regardless of specific type, all variable resistors have a schematic symbol similar to a regular resistor but with some visual modification to indicate “variability.” A few general things to note:

Potentiometers are probably the most common type of variable resistor and an important component to learn about, so let’s get started!

A potentiometer (or pot) is a three-terminal resistor with a sliding or rotating contact that can be used to dynamically vary resistance.

Video. This animation shows how the wiper can be used to vary resistance in a rotary potentiometer. The figure on the right is the formal electrical symbol. Animation by Jon Froehlich. Created in PowerPoint.

Potentiometers are truly ubiquitous electronic components found in everything from volume controls to analog joysticks. In our UW courses, we often provide 10kΩ potentiometers in our kits like the 10K panel mount potentiometer and 10K trim potentiometer, shown below.

Figure. Two example potentiometers commonly included in our hardware kits: a 10kΩ panel mount and and a 10kΩ trim potentiometer.

While potentiometers are often used as human input devices, this is not always the case. For example, a potentiometer might be used in a feedback circuit for a servo motor. As the motor rotates, it also rotates an embedded potentiometer’s control dial (wiper), which feedsback rotational information to the control circuit (see Chapter 15.4 on RC Servos in Scherz and Monk, 2016).

How does a potentiometer work?

Potentiometers come in a range of sizes, power ratings, and physical designs. Some larger designs can handle several watts of power (capable of dissipating alot of heat) while smaller, surface-mounted designs are rated for only a fraction of a watt (just like the \(\frac{1}{4}\) watt resistors in your kits).

Figure. Potentiometers are ubiquitous input devices found in everything from cars to audio mixing boards. There are nearly infinite designs, so we’re only showing a small sample above. Note that you cannot tell the resistance value of a potentiometer (or pot) simply by looking at it nor can you tell whether it is a linear taper or a logarithmic taper. Logarithmic potentiometers are common in audio applications (because the human ear senses loudness logarithmically). Images sources: the potentiometer pictures with dark backgrounds are from Adafruit. The others are from digikey.

If you’re curious about how a potentiometer is constructed, this video by John Cooper provides a wonderful deconstruction of rotary potentiometers and how they work.

Video. A video deconstruction of potentiometers and how they work by John Cooper (on YouTube).

You have very likely interacted with potentiometers many times in your life; however, they have been covered by knobs, which make the potentiometer more ergonomic and grippable.

There are a large diversity of knobs, which fit both panel-mount potentiometers and rotary encoders, used in a variety of user-facing applications like audio mixers, joysticks, and control panels. Take a look at some examples below:

A fun introductory 3D-printing exercise is to design, model, and print your own potentiometer knob. We typically do this activity at the beginning of our fabrication module in our physical computing course. Here are some simple example 3D-printable potentiometer knobs that we designed.

Figure. Three simple potentiometer knobs created in Fusion 360 (in 5-10 minutes each). The CAD designs take roughly 20 minutes to print on an Ultimaker 2+ 3D printer with 0.2mm layer height and no supports or plate adhesion (e.g., brims). All designs by Jon Froehlich. You can see step-by-step tutorial videos here and here.

Just as our 3D-printed designs hint at, potentiometers have a long history as game controllers. In our hardware kits, we often include a 2-axis joystick like this one from Parallax ($6.95 on Adafruit), which contains two embedded 10kΩ potentiometers.

Figure. The Parallax 2-Axis Joystick has two embedded 10 kΩ potentiometers, one for each axis. You can see a video demo here.

Video. A short snippet from this official Parallax video showing how physical movement of the joystick is translated into an electrical signal using two potentiometers.

Potentiometers are actually conveniently packaged voltage dividers, which we first described in Lesson 3: \(R_{1}\) and \(R_{2}\) divide the voltage as the potentiometer wiper moves.

Figure. A potentiometer is a compact voltage divider. Image made in PowerPoint.

Figure. Let’s hookup the potentiometer to a 5V and ground. Image made in PowerPoint.

Using a potentiometer as a two-terminal variable resistor

Whew, now we’re ready to build stuff! Let’s start by building a simple LED circuit with our potentiometer as a two-terminal variable resistor. Here, we will only use one outer leg (either Leg 1 or 3, it doesn’t matter) and the signal leg (Leg 2). Let’s take a look at the circuit diagram—is it what you expected? Why or why not?

Figure. An example of how to hook up a potentiometer as a variable resistor. Image made in Fritzing and PowerPoint.

Do you notice that additional fixed-value resistor in our circuit? Why do you think we have it?

Answer: because many potentiometers go from 0Ω to their max value, we must use a “backup” resistor in series with our potentiometer. Otherwise, when we rotate the potentiometer to low resistance values, too much current will go through our LED. For example, with a typical red LED with \(V_f=2V\) and a 9V battery, if we set the potentiometer to 50Ω, then we will have \(I=\frac{7V}{50Ω}=140mA\), which is far beyond the 20-30mA threshold of the LED.

Video. Here’s an example of what would happen if you rotated the potentiometer to low resistance without a backup resistor. Boom, another blown out LED. Video made with Tinkercad and Camtasia.

You can, of course, also build a potentiometer-based circuit in CircuitJS like this one.

Figure. An example of how to hook up a potentiometer as a variable resistor with a breadboard. Many other possible functionally equivalent circuits exist. Image made in Fritzing and PowerPoint.

For both Tinkercad Circuits, include a screenshot in your prototyping journals and describe your observations (just a sentence or two is fine).

After you’ve built and simulated the circuits in Tinkercad, we’d like you to physically build the breadedboarded version with your hardware kits. Take a photo and a quick demo video of the circuit working and put them in your prototyping journals. Describe any challenges.

Video. Here’s one possible way to breadboard a trim potentiometer circuit with a backup resistor and red LED. What did you make? Please take a similar video for your prototyping journals.

Activity: Swap in another variable resistor

Choose two of these and swap them in instead of the trim potentiometer on your breadboard. Take some photos, a video demo, and write a brief description of what you observed/learned for your prototyping journals.

We provide two examples below.

The force-sensitive resistor (FSR) responds to force or pressure. As an applied force increases, the resistance across the two terminals decreases. In the simple circuit below, the LED will receive more current (and emit more light as a result) as more pressure is applied to the FSR.

Figure. An example of how to hook-up a force-sensitive resistor for a simple LED circuit. Image made in Fritzing and PowerPoint.

Video. A video demonstration of an FSR-based LED circuit.

A light-dependent resistor (LDR)—sometimes called a photocell or photo-sensitive resistor—reduces its resistance in response to light. In the simple circuit below, you’ll notice that the red LED illuminates brightly in response to a flashlight. Often, we want just the opposite behavior: brighten an LED inversely proportional to light.

Figure. An example light-dependent resistor (LDR) circuit with an LED. In this configuration, the LED brightness will increase in proportion to the amount of light cast on the LDR sensor. Image made in Fritzing and PowerPoint.

And the video demonstration:

Video. A video demonstration of an LDR-based LED circuit.

For the final activity, we’d like you to build your own DIY variable resistor. We included 12B graphite pencils in your hardware kits for just this purpose but you can use other materials if you so choose.

This activity is inspired by Jeff Feddersen, from NYU’s ITP program. Please watch this video before continuing (it’s one of my favorites!).

For your prototyping journals, sketch out the circuit diagram for the DIY potentiometer, physically build it, and then take some photos and a video demonstrating how it works. Please also include a brief description and a reflection of what you learned.

Here is an example DIY rotary potentiometer I made out of some cardboard, paper, a paper clip and a thumb tack (for the wiper), and a 12B pencil sketch (for the resistive material).

Video. A lo-fi rotary potentiometer made out of some cardboard, paper, a paper clip and a thumb tack (for the wiper), and a 12B pencil sketch (for the resistive material).

Here is an example DIY slider potentiometer I made out of similar materials: cardboard, paper, a cardboard wiper with copper tape, and some 12B pencil sketch (for the resistive track).

Video. A lo-fi slider potentiometer made out of some cardboard, paper, copper tape-wrapped cardboard (for the slider), and a 12B pencil sketch (for the resistive track).

There are lots of great resources for building lo-fi sensors, buttons, and connectors using everyday craft materials like tinfoil, cardboard, and paper clips. See these resources to help kickstart your brainstorming!