In the previous lesson, we learned how to turn on and off an LED using digitalWrite—which worked by alternatively setting Pin 3 to 5V (HIGH) and 0V (LOW). In this lesson, we’ll learn how to programmatically control the output voltage at finer gradations using analogWrite. More specifically, we will gradually fade an LED on and off like the animation below illustrates.

This illustrative animation doesn’t show current (the yellow circles) only due to my limited animation skills. But hopefully you can visualize (in your mind) how the LED varies in brightness with current just the same. :)

You will use the same materials as before, including the Arduino IDE and a USB cable to upload your program from your computer to your Arduino.

As noted in our previous lesson, the Arduino Uno has 14 digital I/O pins:

However, 6 of the 14 I/O pins can also be used for “analog” output—voltage output that is not just HIGH (5V) or LOW (0V) but between these two extremes. These analog output pins are indicated by the tilde (~) printed next to the pin on the Arduino (silkscreened directly on the Arduino’s PCB).

So, for this lesson, we don’t have to change our circuit at all! You can keep the same circuit as the LED Blink lesson. Indeed, this is the reason why we selected Pin 3 in the first place.

A common confusion amongst beginners is mixing up the analog output pins and the analog input pins. For digital I/O, the input and output pins are the same and configurable to INPUT or OUTPUT using the pinMode command, the analog I/O pins are different! See the figure below: 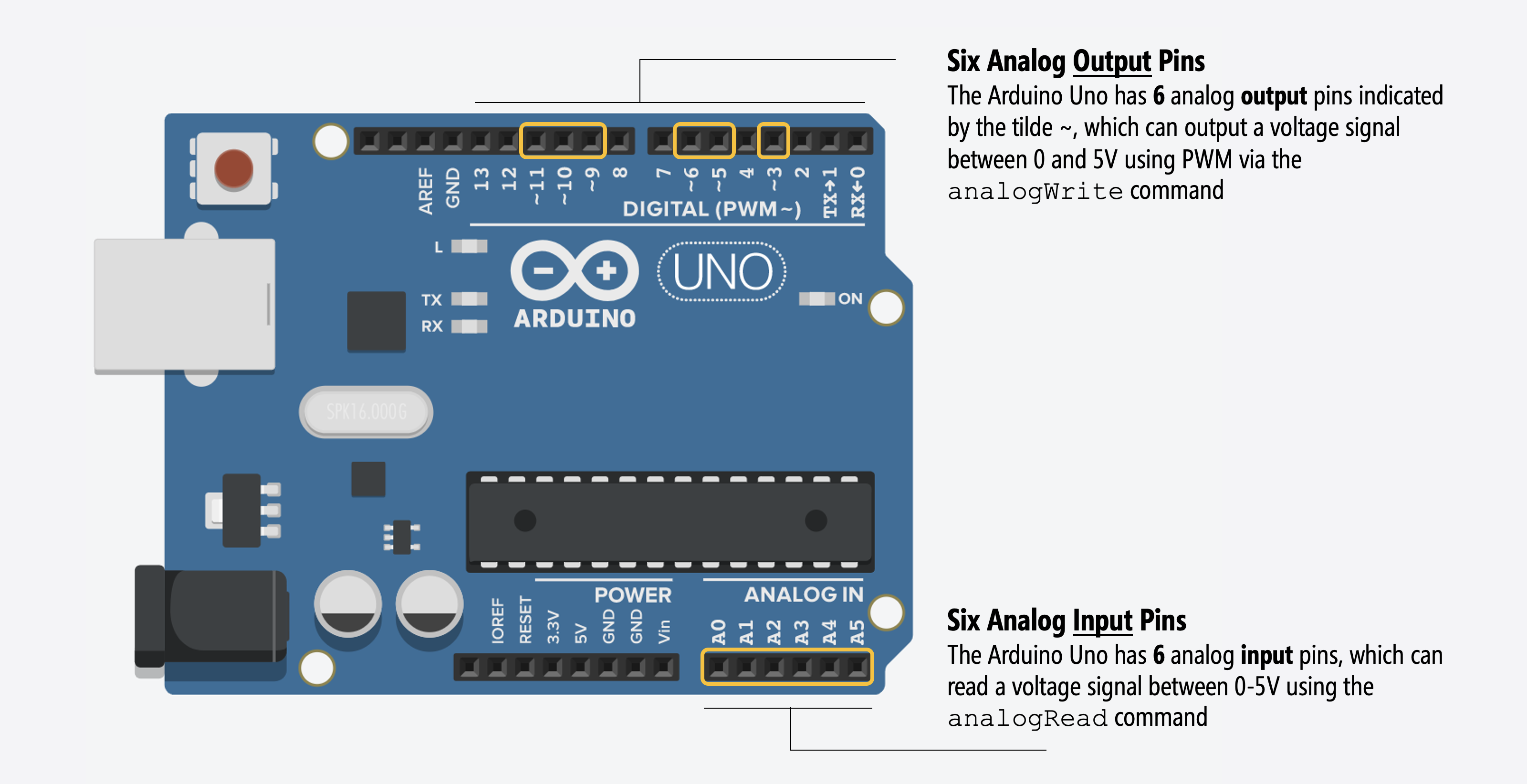 To gradually fade an LED, we are going to use the analogWrite(int pin, int value) function, which takes in a pin as the first parameter and an 8-bit value between 0-255 as the second.

Despite its name, the Arduino Uno, Leonardo, Nano, Mega, and many other Arduino boards do not actually provide true analog output via a digital-to-analog converter (DAC). Instead, they use a method called Pulse-Width Modulation (PWM) to emulate analog output. For most purposes—like changing the brightness of an LED or controlling the speed of a motor—this won’t matter; however, if you want to output a high-frequency sinusoidal waveform—a true analog output signal—like playing music, then you’ll need to either find an Arduino microcontroller with a built-in DAC like the Due (see this SimpleAudioPlayer tutorial) or connect your Uno to an external DAC board like this SparkFun MP3 Player Shield. 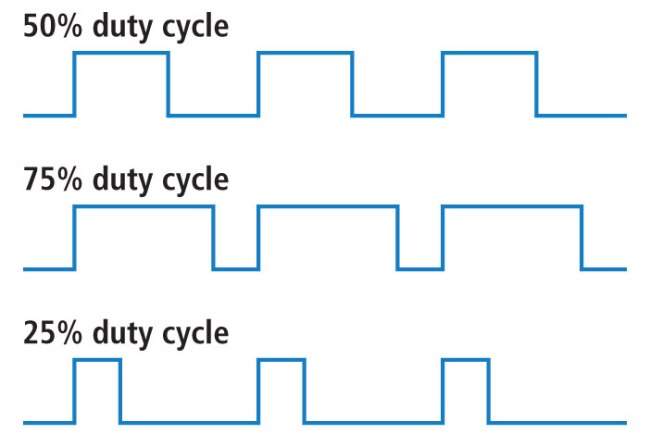 Could I manually implement PWM on any pin simply by rapidly turning the pin on and off at a desired frequency and duty cycle? Yes, however, the PWM waveform could be jittery (unless you disable interrupts). See: SecretsOfArduinoPWM and example code that manually implements a PWM loop.

To learn more about PWM, read this guide from ITP NYU and watch their “analog output” video:

OK, so let’s write some code!

Step 1: Start a new sketch in the Arduino IDE

Start a new sketch in the Arduino IDE: 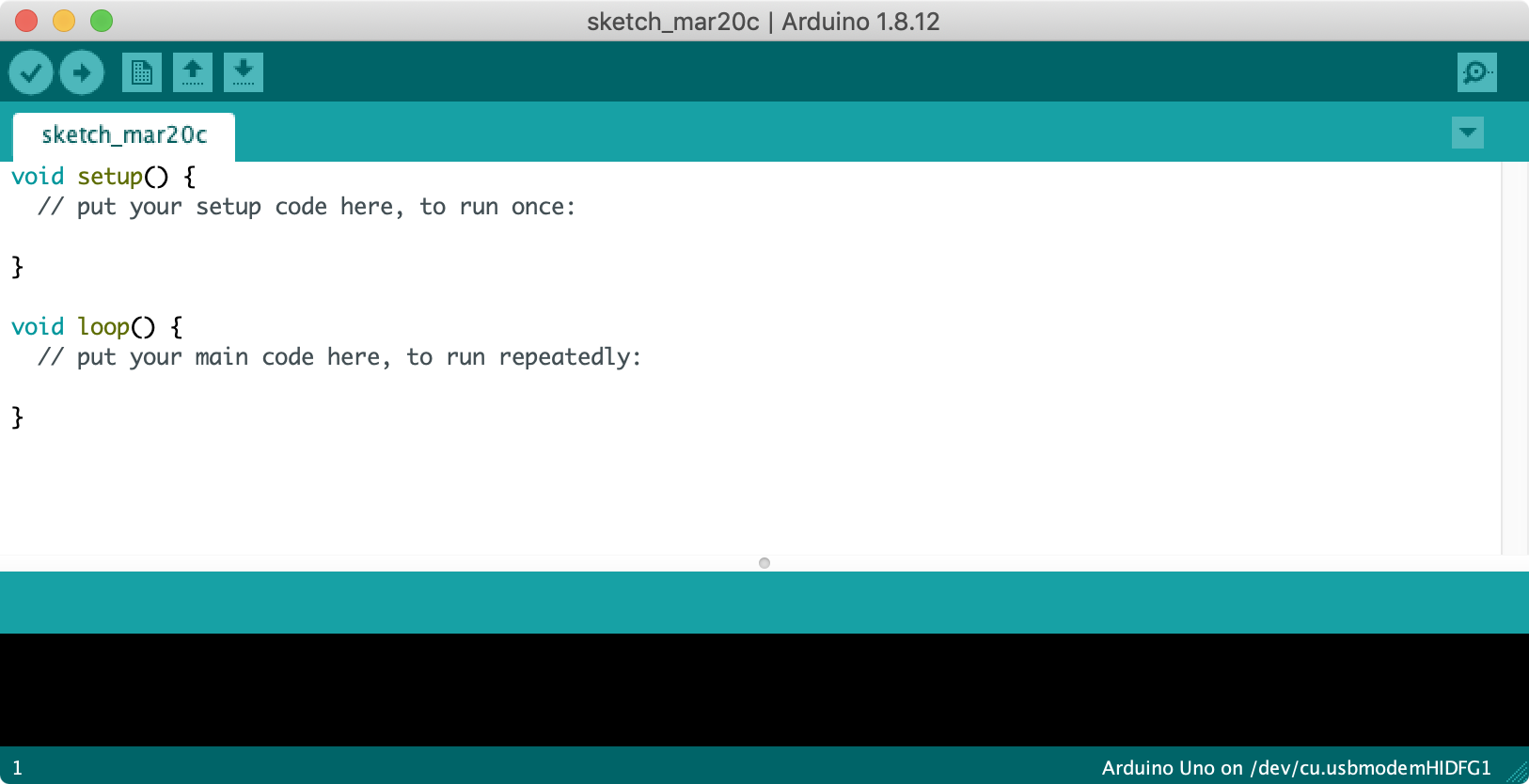 Our initialization code is the same as for LED blink except for the addition of const int MAX_ANALOG_OUT = 255; and a constant for the delay amount of 5 milliseconds (const int DELAY_MS = 5;).

The full code from our GitHub repo is:

Now, compile, upload, and run the code. After upload completes, the LED should immediately begin fading on then off. See video below.

What’s actually happening on Pin 3 when we write out different values to analogWrite? Well, remember, basic Arduino boards like the Uno and Leonardo do not have the ability to write out intermediate voltages (they lack digital-to-analog converters or DACs). So, instead, they “fake it” by using pulse-width modulation (PWM) and modulating the fraction of time that a 5V output waveform is HIGH vs. LOW. This is called the duty cycle.

To create this program, we had to use both analogRead and analogWrite. By the end of this lesson, you should have a strong understanding of analogWrite and PWM. But we won’t learn more about analogRead until we get to the Introduction to Input microcontroller lessons.

In the video below, we see a simulation of our fade code + circuit running in Tinkercad. On the right side, in the Serial Monitor window, we are printing and graphing out the real-time effective voltages output on Pin 3.

Calculating the current through our LED

Of course, it’s the current through the LED that determines brightness. But how can we calculate (effective) current with PWM?

Again, given Ohm’s Law (\(I = \frac{V}{R}\)), we can determine the current through our circuit at various Pin 3 outputs. Recall that current does not pass through an LED until its forward voltage \(V_f\) condition is met. With a red LED, a common forward voltage is \(V_f=2V\). With analogWrite, the GPIO pin is still driven HIGH (5V) but only for a fraction of the time due to PWM (this fraction is called the duty cycle). So, the \(V_f\) requirement is still met and our eyes perceive the LED on but it’s actually flashing on/off imperceptibly quickly!

See the table below for example 8-bit output values for analogWrite on Pin 3 and the effective current.

Remember in the LED blink lesson where we mentioned wanting to avoid long for loops and long delays in our code. Why? Because while we are in a delay, we can’t do anything else: we can’t read or respond to other input (side note: we could use interrupts but let’s defer that point for now). See “What does delay() actually do?” in our Inside Arduino guide.

So, let’s rewrite the fade example but without for loops and, instead, rely on the fact that loop() is already a loop :). While the code below is different, the resulting LED fade behavior is the same (so you won’t notice a difference if you try them both out).

You can find this code in GitHub.

Can you improve the above code even more? How about by eliminating the delay() all together but still allowing for a set interval to “pause” on each LED fade value?

Try writing a solution yourself then look at ours. Are they the same or different? How?

In the next lesson, we will learn about the difference between current sources and current sinks to help reinforce our understanding of how microcontrollers can control output.