In this lesson, you’ll learn about photoresistors and how to use them with and without microcontrollers.

A photoresistor—sometimes called a photocell or light-dependent resistor (LDR)—varies its resistance in response to light. They are small, inexpensive, and easy-to-use. Consequently, photoresistors are popular in children’s toys (see example below), nightlights, clock radios, and other inexpensive gadgets. However, they are not particularly accurate so are best suited for measuring coarse-grain light levels (e.g., the difference between a light and dark room) rather than precise illuminance. Other common light sensors include phototransistors and photodiodes, both which are more accurate and responsive.

Each puzzle piece location has a respective embedded photoresistor, which is used to track whether a piece has been placed or not. When the puzzle is completed (and all photoresistors have been covered), the puzzle plays a fire truck siren. There are a few limitations to this sensing technique: while cheap, the “fire truck” siren can be triggered when the photoresistors are covered (either accidentally via an errant puzzle piece or hand or on purpose), occassionally the siren will be triggered before the puzzle is actually completed (just when the last puzzle piece is hovering over the remaining location), and, of course, the sensing method cannot tell whether a puzzle piece is in the correct position (which is fine if one just needs to infer when the puzzle is completed and not, for example, to help guide a child in completing the puzzle).

Another example use case from inexpensive consumer electronics: an auto-brightening nightlight from General Electric, which gets brighter as the ambient light gets darker.

Photoresistors are typically made of Cadmium-Sulfide (CdS), which is a semiconductor that reacts to light. As Platt describes, “when exposed to light, more charge carriers are excited into states where they are mobile and can participate in conduction. As a result, electrical resistance decreases.” Because they are made from Cadmium-Sulfide, they are sometimes referred to as CdS cells.

To describe the relationship between photoresistance and light level, we need a more precise definition of the how light levels are characterized. Enter: Lux!

The SI unit of illuminance is called lux, which is, formally, the “luminous flux per unit area”. In photometry, lux is used as a measure of the intensity of light that hits or passes through a surface as perceived by the human eye.

If you’re unfamiliar with lux (as we once were), it’s useful to provide some examples (from Wikipedia).

While finding a detailed datasheet on photoresistors is difficult, both Sparkfun and Adafruit provide low-quality graphs of photoresistor resistance vs. lux on their websites.

Graphs from Sparkfun and Adafruit. Both are in log-log scale.

Using a professional light meter, David Williams at All About Circuits also conducted their own experiments of photoresistance vs. illumination and found the same log-log relationship. We’ve used this data to graph both a linear version (which is easier to understand) and log-log version with annotations. Same data, just the scales are different.

The Adafruit documentation emphasizes that each photocell will perform differently due to manufacturing and other variations and reaffirms that photocells should not be used to precisely measure light levels (and each photocell requires individual calibration).

Photoresistors are also not uniformly responsive to all wavelengths of light. Their sensitivity peaks between 500nm (green) and 700nm (red). See the relative spectral response graph below: 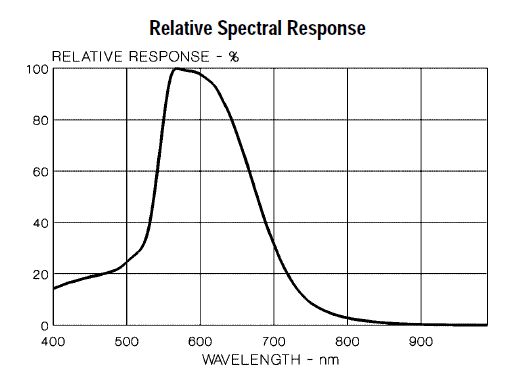 Photoresistors should also not be used to sense or measure rapid fluctuations of light because of response latency. According to Platt as well as others, photoresistors may take ~10ms to stabilize at a lower resistance when light is applied after total darkness and up to 1 second to rise back to a stable high resistance after light’s removal. Phototransistors and photodiodes are both more responsive.

Cadmium-Sulfide is classified as a hazardous material

Cadmium-Sulfide is classified as a hazardous environmental chemical by the RoHS and are thus unavailable in Europe. They are, however, still available in the US (and still used in toy manufacturing, yay!).

Measuring photoresistance with a multimeter

If you have a multimeter, let’s use it to get your own empirical sense of a photoresistor’s resistance as a function of light. Hook up each leg of the photoresistor to the multimeter (with the ohmmeter setting): one leg to the red probe and the other to the black probe (either orientation works as photoresistors have no polarity). What do you observe?

Here’s the results of our own informal experiments:

Our photoresistor ranges from 1.6kΩ with our desk lamp to 10kΩ with the lights off to over ~10MΩ when covered by a coffee cup.

Making an LED dimmer with a photoresistor

Let’s make something. How about a simple nightlight that automatically turns on (gets brighter) in the dark.

As before, we’re going to explore this sensor first without a microcontroller to build up familiarity.

Like the FSR, the photoresistor is a two-legged resistive sensor and is non-polarized. So, you can connect them in “either direction” in your circuits.

You might initially try to hook up the photoresistor in the same way as the FSR: in-series with the LED. As we measured a minimum resistance of ~50-100Ω when an ultrabright LED flashlight was pointed directly at the photoresistor, in both wiring diagrams, we include a backup current limiting resistor. 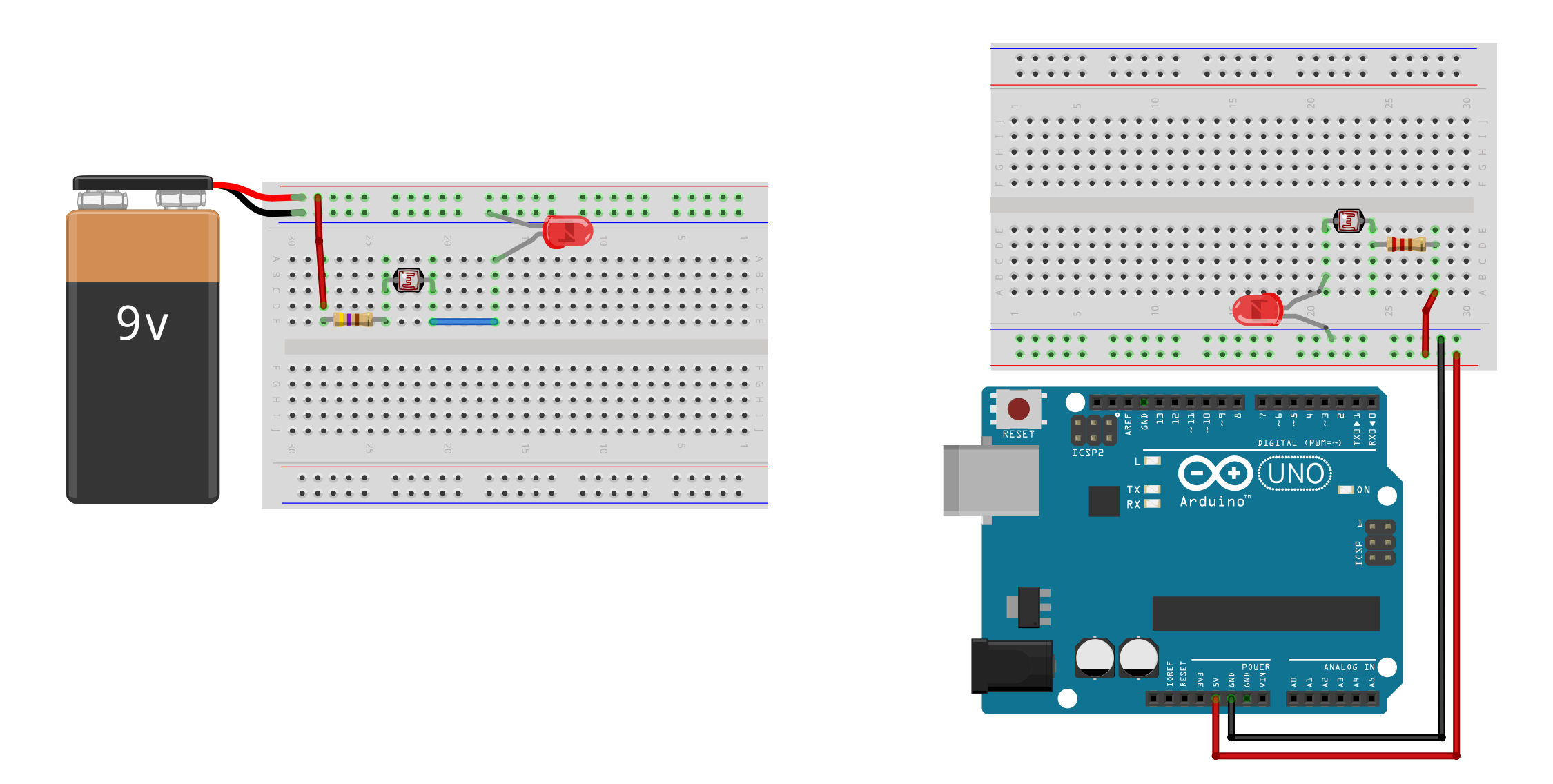 Try making this circuit. What happens?

Because the photoresistor resistance decreases with light levels, the LED gets brighter as the ambient light gets brighter. This is the opposite behavior of what we want! See video below.

In this video, the photoresistor is in series with the LED. As the ambient light level increases, the photoresistor resistance decreases, and the LED gets brighter. But we want the opposite effect? Remember, we are using the Arduino only for power here. Note: this video has no audio.

What should we do? Well, the coder in us wants to immediately hook the sensor up to the microcontroller and solve this in code (which is a fine solution and, ultimately, what we will do!). However, can we solve this in hardware too?

We are going to create an inverse relationship between ambient light levels and LED brightness by placing the LED in parallel with the photoresistor wired in a voltage divider configuration. Now, as the photoresistor resistance drops, the LED will get brighter. The key is in selecting an appropriate fixed resistor \(R\). 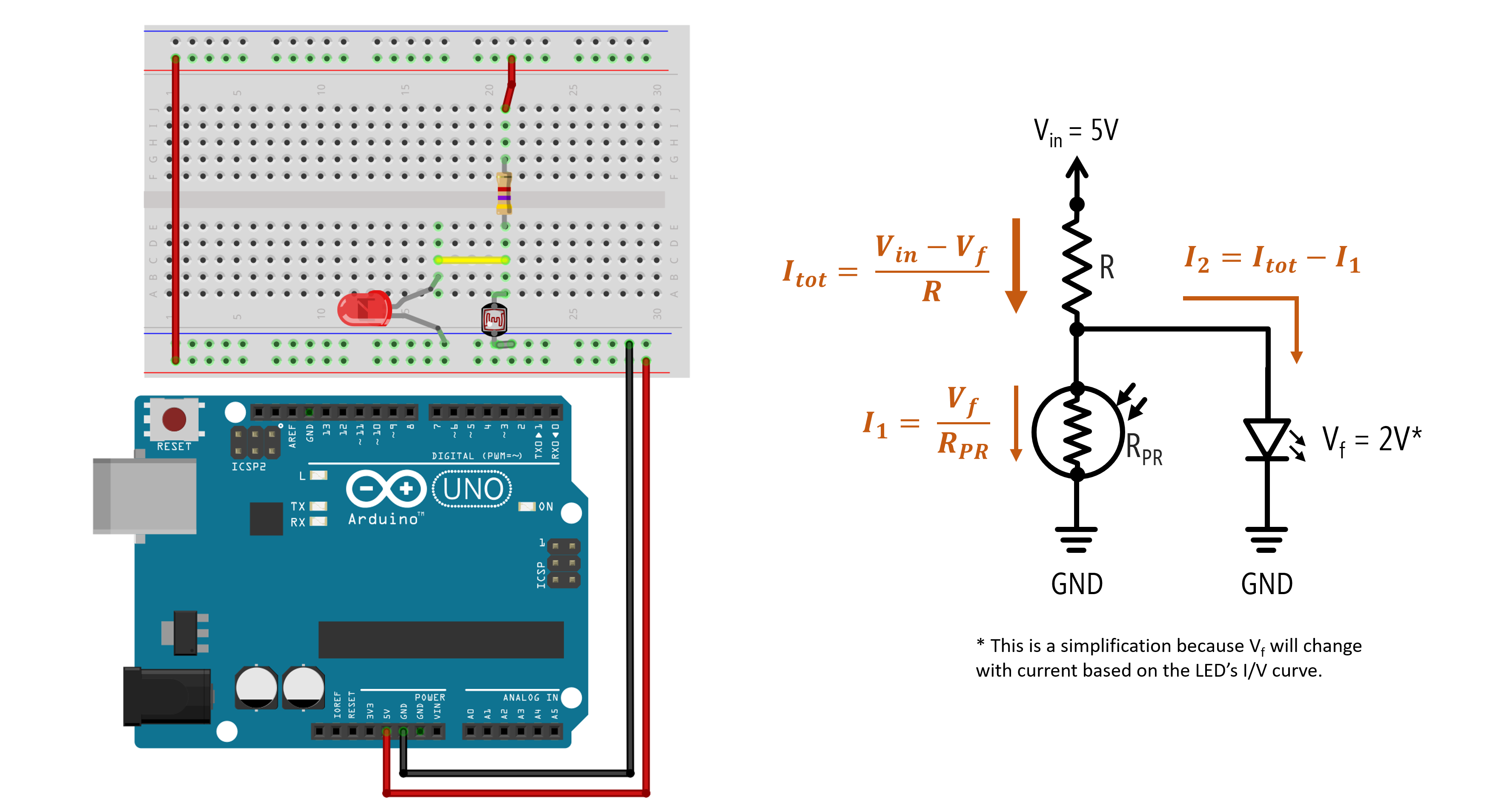 So, while this circuit works, it doesn’t work well. We are not able to sufficiently control the current through the LED based on lighting conditions. Yes, we have the general LED behavior we want but 0.10mA is a very small current, so the LED is not very bright (even in the darkest conditions). See video below.

This video shows a photoresistor wired in parallel with an LED in a voltage divider to inverse the relationship between ambient light levels and LED brightness. Again, the Arduino is used solely for power. Note: this video has no audio.

So, what should we do?

As a two-legged variable resistor, we can use the same voltage divider wiring as the FSR. Recall the voltage divider equation introduced in the potentiometers lesson: \(V_{out} = V_{in} \cdot \frac{R_2}{R_1 + R_2}\).

Either wiring will work. They are functionally equivalent but have opposite behavior.

And, of course, we could inverse the relationship in software (rather than hardware). So, for example, if we wanted to make an LED brighter as light levels decrease with the left wiring configuration, we could do the following:

And I often like to simplify this even more by relying on map for the inversion (notice how I flip the order of 255 and 0), so the code becomes:

What value should we make our fixed resistor?

I think, by now, we understand how to hook up a two-leg resistive sensor to a microcontroller: using a voltage divider! We covered this both in our potentiometers lesson and our force-sensitive resistor lesson.

However, one key question remains: how do we know what to use as the fixed resistor in the voltage divider?

Ideally, we would want to: (1) vary \(V_{out}\) across our entire ADC range (0-5V)—otherwise, we’re artificially limiting our precision—and (2) focus our sensing range on the expected light levels of interest (for example, do we care more about bright lights or darker environments?).

To help answer this, we can graph \(V_{out}\) as a function of various fixed resistors and a range of photoresistor resistances. We’ve also marked approximate resistances of the photoresistor based on ambient light levels. Note that these graphs don’t incorporate how the photoresistor’s resistance changes in response to light: they simply graph the voltage divider output for \(R_1\) and varying \(R_2\). Both graphs show the same data, just the inverse depending on whether the fixed resistor is \(R_1\) or \(R_2\). 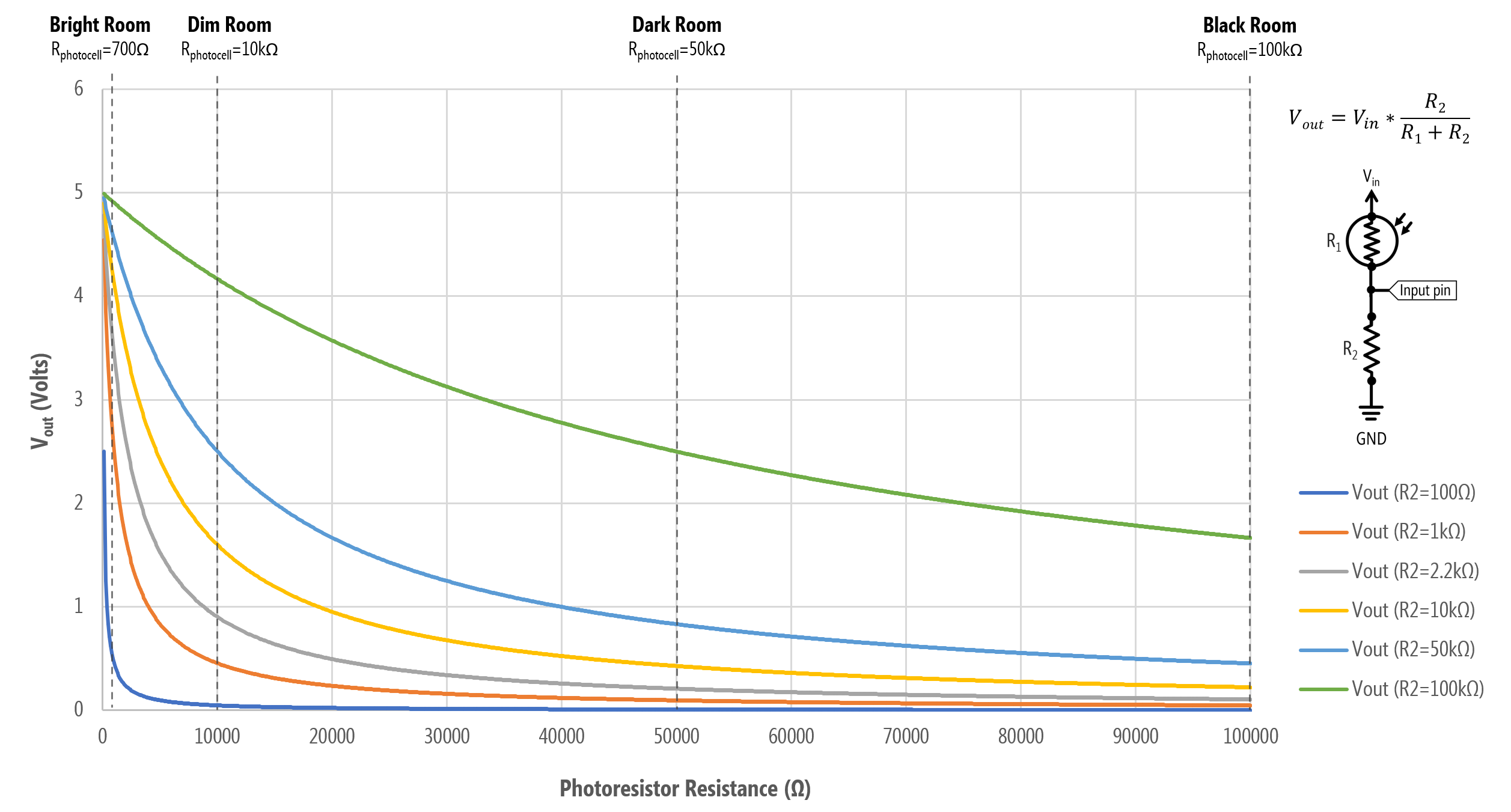 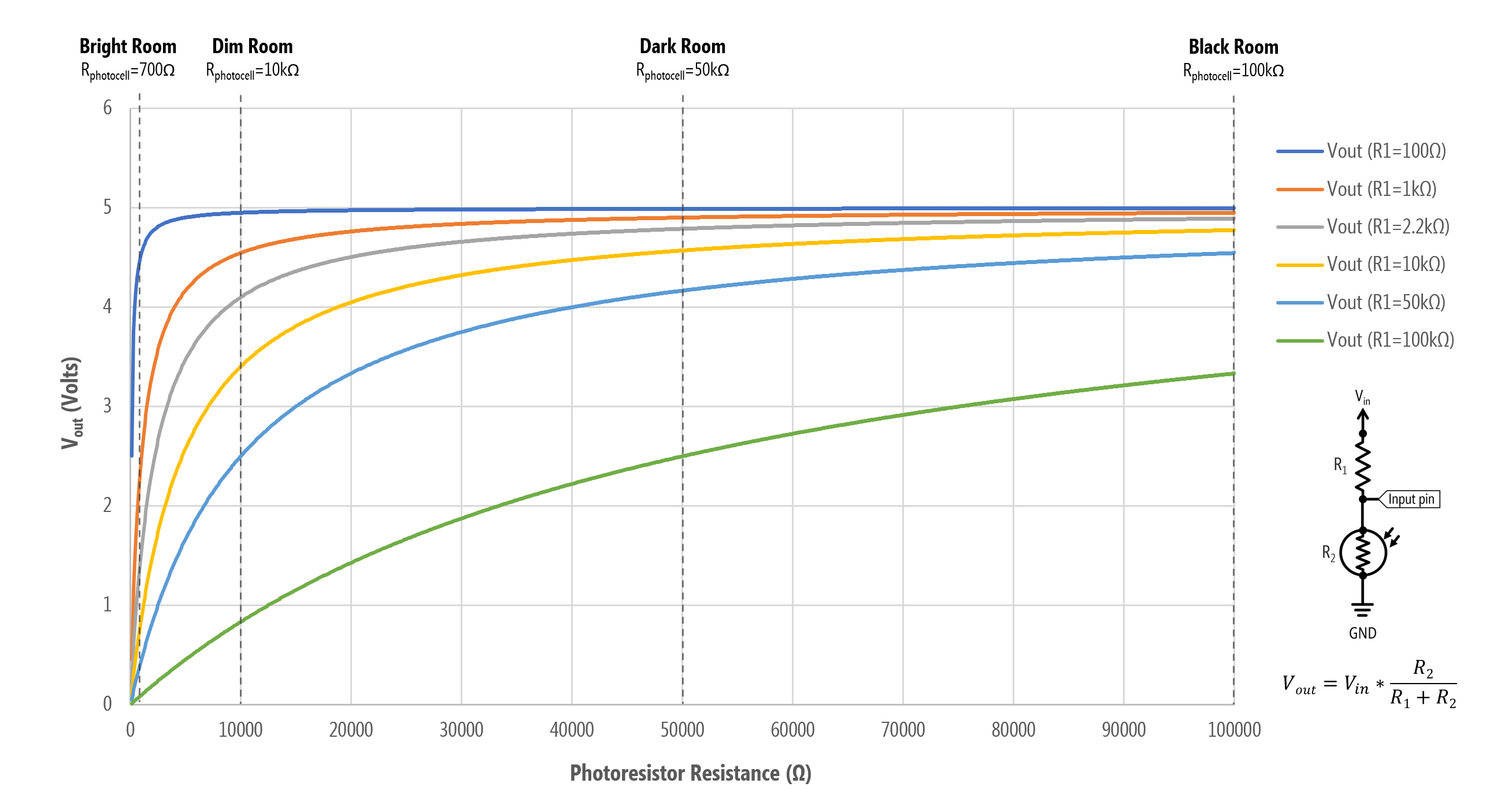 Let’s focus on the bottom graph for now (the “darkness” sensor configuration). Here’s a table of \(V_{out}\) values for six different fixed resistors (\(R_1\)) and some various resistances for the photoresistor (\(R_2\)) extracted from the graph.

From the graph and table, we can select an \(R_1\) best suited for our expected light level in our deployment environment.

To help select a fixed resistor value, both Platt and the Adafruit tutorial recommend the following equation: \(R_{fixed} = \sqrt{R_{min} \cdot R_{max}}\) where \(R_{min}\) is the minimum photoresistance value expected in the deployment environment (i.e., resistance at highest light intensity) and \(R_{max}\) is the maximum resistance value expected (i.e., resistance at lowest light intensity). Adafruit refers to this as the “Axel Benz” formulation but we couldn’t determine a reliable source for this.

OK, now let’s make a simple auto-on nightlight with the Arduino that inversely sets an LED’s brightness based on light level. 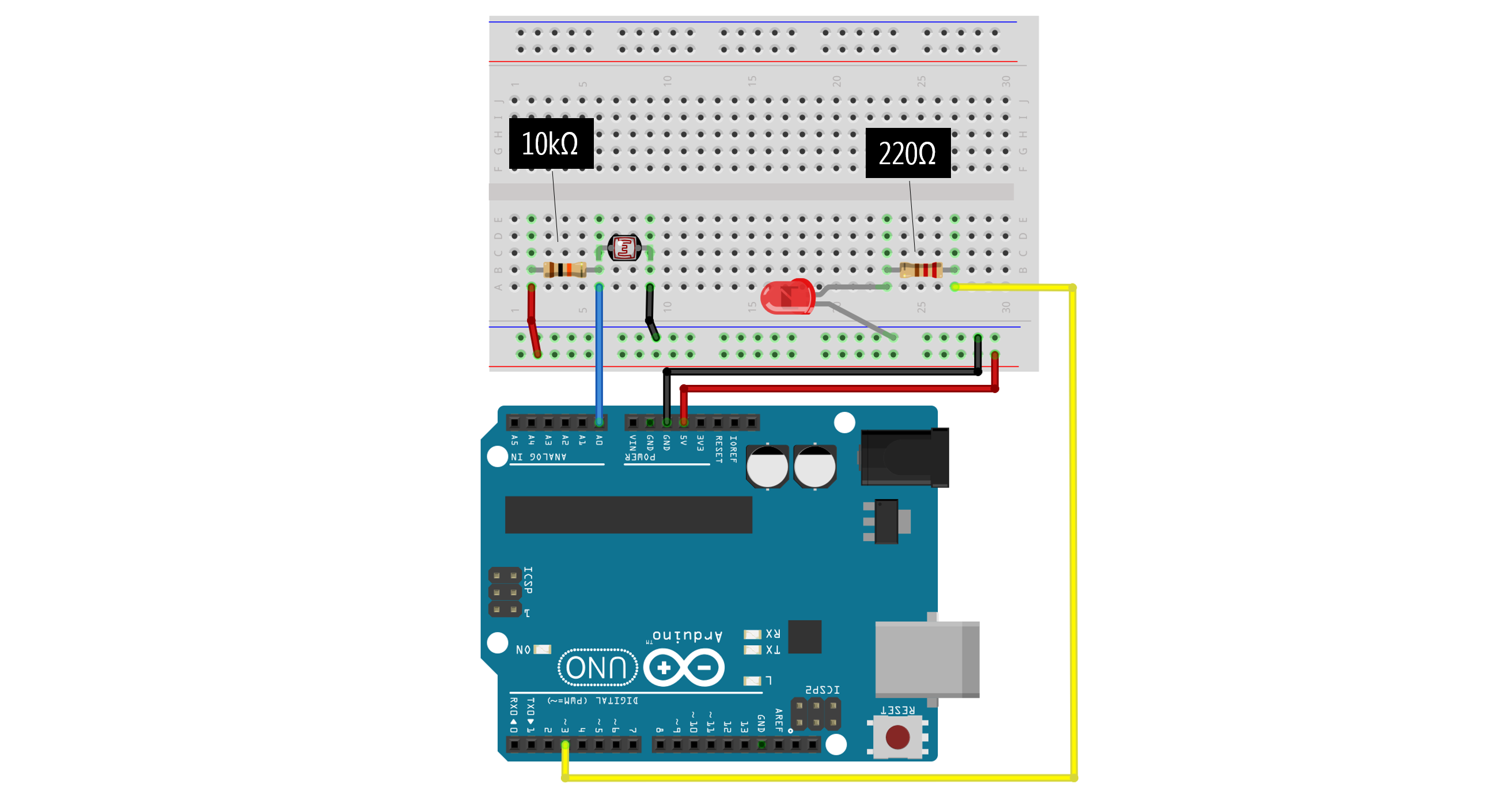 Try writing the code before looking at our solution. Print your analogRead values from the photoresistor to better determine light/dark thresholds to set your LED brightness. For example, your auto-on nightlight should be completely off when it’s “light” and fully bright when it’s “dark” (but you can control these tolerances).

Some interesting uses of photoresistors in HCI/UbiComp research and beyond: