In this lesson, we will learn how to blink multiple LEDs at different rates and build our first C/C++ class, which will greatly simplify our code and, as an added bonus, reduce its size by eliminating code redundancy!

As with our previous lesson on crossfading RGB LEDs, this lesson involves simple circuits but comparatively complex code. Often, when using microcontrollers, our code is the magic sauce—the circuits are straightforward but the code can be complicated.

The canonical and beloved first Arduino sketch, Blink, enables beginners to quickly build and write code for a circuit. The code looks something like this, which we covered in our own Blink lesson:

Blink is easy. It’s gratifying. But… it sets up a flawed mental model about how to structure programs and when/how to use delay().

What if you want to blink multiple LEDs at different rates? How would you do this with delay()? Well, you can’t. While in a delay(), your program is literally doing nothing (well, it’s stuck in a while loop waiting for the delay period to finish but that’s essentially nothing).

So, what should we do instead? We eliminate all delays and track time and state using state machines. Alternatively, we could use interrupts (but we’ll cover that later).

You’ll need three LEDs—we’ll use red, blue, and yellow but you can use whatever LEDs you want—along with current limiting resistors, a breadboard, and an Arduino.

The circuit is the same as our basic LED blink lesson but we duplicate it three times—once for each LED. We could use any of the Arduino’s GPIO pins, but we chose Pins 2, 5, and 9 simply to space out the circuit and make it easier to read.

By now, this circuit and wiring should feel familiar. Indeed, you may not even need a wiring diagram like this to help! 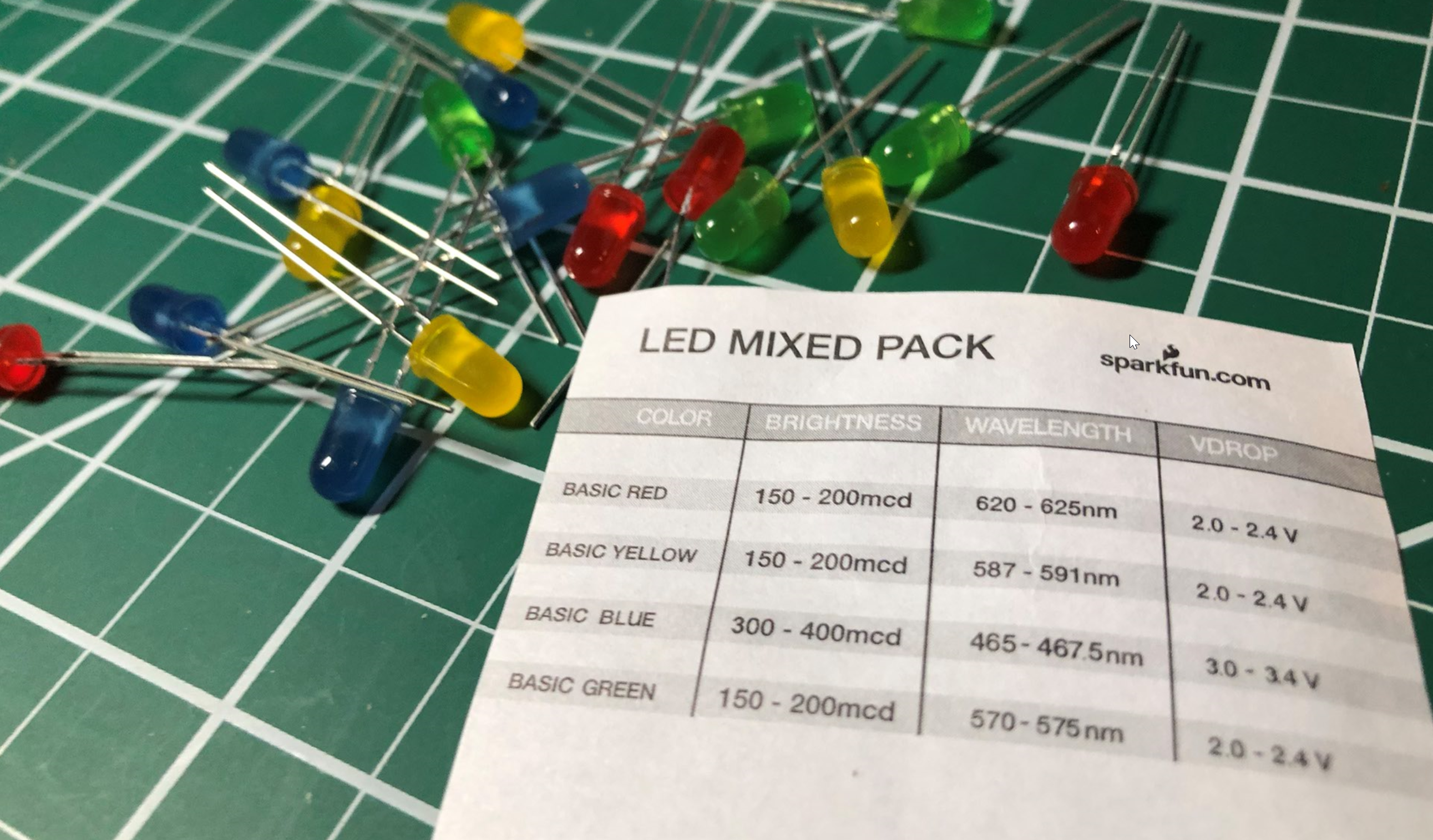 The LED assorted pack from Sparkfun.com, which shows the Vdrop (or Vf) for each LED.

We are going to implement two multi-rate blinking approaches:

For our initial approach, we need four things for each LED:

For the toggle timestamps and LED states, we’ll use variables like _led1LastToggledTimestampMs and _led1State. We can toggle ledState simply by: ledState = !ledState.

To capture timestamps, we’ll use Arduino’s millis() function, which returns “the number of milliseconds passed since the Arduino board began running the current program” as an unsigned long.

We then use the same general logic as the “blinking without delays” covered previously for each LED:

This sub-section provides more background on tracking timestamps and overflow. Feel free to skip this if you’d like.

An important question to ask is: what happens if my Arduino needs to run for more than ~50 days and I’m relying on millis() to track time? Will the subtraction math (currentTimestampMs - _lastToggledTimestampMs >= LED_BLINK_INTERVAL_MS) still work? Even during an overflow condition?

Great question! And yes, it will still work! And the reason is because we are using unsigned data types, which inform the compiler that these values can never be < 0. This is crucial.

For example, imagine that _lastToggledTimestampMs is 4,294,967,290 or 0xFFFFFFFA in hexadecimal (32 bits), which is 5 milliseconds from overflow. And then imagine that millis() overflows (returns back to 0) and currentTimestampMs becomes, say, 1 or 0x00000001. So, our subtraction is then: 0x00000001 - 0xFFFFFFFA. There is 7 milliseconds difference between these two numbers, so we’d like the subtraction to result in 7:

And this is what we get! Feel free to experiment with this yourself by running the code below on you Arduino. We also suggest this article by James Lewis about millis(), overflow, and arithmetic for more background.

The full code for multi-rate blinking

OK, now back to the code. So, our full code for multi-rate blinking is below:

Given the amount of code redundancy and shared logic and structure, the above solution is a strong candidate for refactoring into functions or classes. So, let’s do it!

We’re going to define a new class, called Blinker, which will greatly simplify our code, decrease redundancy (and the potential for human error), and even make our compiled code smaller (from 1,118 to 1,042 bytes of program storage space).

Once we’ve made the Blinker class, our main code reduces to:

But we have to make the Blinker class first, which we do below!

If you’re familiar with object-oriented programming and declaring and using classes in Java, C#, Python, and even, to some extent, JavaScript since ECMAScript 2015, then C++ classes will feel familiar (but certainly have their own peculiarities). C++ classes have a class name, member variables, member functions, and like C# and Java, access specifiers (e.g., private, public). For a quick tutorial, see these links (link1, link2).

To build our Blinker class, recall that we need four things per LED:

For the Blinker class, we are simply going to convert these four things into member variables:

Finally, we need two functions: a constructor and update()—the latter which handles our core logic and toggling code and is intended to be called once per loop() iteration. We are going to declare these in the class definition itself:

In order to use the Blinker class (as shown above), it needs to be defined within your .ino sketch at the top of the file (before you try to instantiate a Blinker object). Later, we’ll also show how to create a class that exists in its own .h and .cpp files.

In C++, you declare member variables and function signatures in a .h file and the function implementations in a .cpp file. This is often a cleaner solution than embedding classes within the .ino itself.

Indeed, if we move Blinker into separate .h and .cpp files, then the full .ino sketch simply looks like:

See the code in our GitHub repository.

Want to go further? Here are some design challenges to help improve your skills:

We did it! This completes our Intro to Output series. Let’s now begin Intro to Input to learn about buttons, sensors, voltage dividers, and more!