Lesson 3: Fading an LED with PWM

In this lesson, we’ll show how to use PWM output on the ESP32 to fade an LED on and off. This is where our lessons begin to differ from the Intro to Output series in the Intro to Arduino section.

Importantly, the analogWrite method—which was always a misnomer in the Arduino library because it output a pulse-width modulation (PWM) waveform rather than a true analog voltage—is not implemented in the ESP32 Arduino library. Instead, there is a set of PWM methods, which provide additional control but at a cost of complexity. So, it’s good that, by now, you understand PWM. If you want a refresher, see our description and watch the videos here.

You’ll need the same materials as the last lesson:

To fade an LED on and off with an Arduino Uno (or other basic Arduino boards), you use the analogWrite method. As we know by now, analogWrite does not actually drive an analog voltage to the specified pin but, instead, uses pulse-width modulation (PWM). These PWM waves are produced by hardware timers, which precisely drive a pin HIGH and LOW based on the set duty cycle. So, on the Arduino Uno, analogWrite(3, 127) would output a 5V value for half the period (because 127/255 = ~50%) on Pin 3 and analogWrite(3, 191) would output a 5V for 75% of the period (because 191/255 = ~75%). The fraction of the time the signal is HIGH is called the duty cycle. The Arduino Uno (and Leonardo) only have six PWM outputs because they have three timers, each which can be used to control two PWM pins.

On the ESP32, all 18 GPIO pins support PWM but the programming approach is different. Rather than analogWrite, we’ll use Espressif’s LED control (LEDC) library. More specifically, we’ll use an Arduino-based abstraction layer above this. While the available documentation for the Arduino LEDC library is a bit light (indeed, I never found formal API docs), the code is open source and available here (.h file, .c file). And we’ll show you how to use it below.

The LEDC library was written primarily to control LEDs but can also be used for other purposes where PWM waveforms are useful like playing “music” to piezo speakers (just like we did with tone() in our simple piano lesson) and driving motors. The Arduino version of this library is part of the core ESP32 Arduino library, so you don’t need any include statements to use it.

Unlike all the other I/O we’ve done thus far with the Arduino, the LEDC library works on channels rather than individual pins. To apply a PWM wave to a pin, first setup a channel with a PWM waveform frequency and duty cycle and then subscribe or “attach” that pin to this channel. Multiple pins can attach to the same channel and will receive the same PWM waveform. The ESP32 has 16 channels in total, each which can generate an independent waveform. So, while all 18 GPIO pins support PWM, we can only drive 16 of them at once with unique waveforms. However, we can attach all 18 GPIO pins to a single channel (or divide them across channels). In the animation below, we’ve attached all 18 GPIO pins to channel 0.

All 18 GPIO pins are subscribed to the same PWM channel.

The Espressif docs emphasize that the PWM frequency and resolution are interdependent; however, they do not precisely describe this relationship but rather provide examples:

If you attempt to set incompatible frequency and duty resolution combinations, the following error will be reported on serial monitor:

UPDATE: I found that this error is not shown when using the Arduino LEDC library because internally, the ledcSetup function does bounds checking and, if a threshold is exceeded, sets things to their maximum values (link).

Relationship between PWM frequency and resolution

So why and how are the PWM frequency and resolution interdependent? While the ESP32 docs are, unfortunately, sparse, here’s the explanation.

But what about resolution? Well, resolution is really about how much we can slice up one period of the PWM wave into different duty cycles. And here’s the insight: slicing up the PWM wave requires a CPU clock running at the \(PWM_{freq} * 2^{PWM resolution}\). Why? Because to generate those duty cycles, you need to be able to create those time slices. And the only way to do so is with an even faster clock. (Note: this is the ideal. In reality, all things have overhead and so my understanding is that you generally want a CPU clock to be 30-50% faster than your fastest PWM freq; again, it would be nice if ESP32 actually gave us the equation).

Here’s a visual example that, hopefully, further clarifies the concept. Here, you can see the clock running at 40MHz, the PWM freq at 1MHz, and then various PWM resolutions. For each of the PWM resolutions, I put in their “time slices”—this is when the PWM waveform generator would be able to potentially set the PWM wave HIGH or LOW for a given duty cycle. Notice how as the PWM resolution increases, the need for a faster and faster CPU clock also increases (to be able to meet those increasingly demanding duty cycle resolutions).

For more PWM examples, see this PDF that we made.

So what PWM frequency and resolution should I use?

So, what PWM frequency and resolution should you use? This is context dependent. Remember, the Arduino Uno supplies a ~490 Hz PWM waveform at 8 bits—though pins 5 and 6 are can drive a waveform at 980 Hz (link). And this is more than fast enough to smoothly fade between different LED brightness levels. So, you can always start there (~490 Hz freq, 8-bit resolution) and then play around.

Despite the somewhat confusing (and lacking) documentation, using the LEDC API is relatively straightforward:

In addition to the LEDC module, the ESP32 supports two other analog output options:

In this lesson, however, we are going to focus on using the LEDC library to produce PWM waveforms that will fade in and out an LED.

We can use the same circuit as before:

We’ll walk you through the code just as we did for some of the original Arduino Intro to Output lessons. While our code is different, you may want to also access ESP32’s official fade example in the Arduino IDE by clicking on File -> Examples -> ESP32 -> AnalogOut -> LEDCSoftwareFade. It’s also open source and on github. 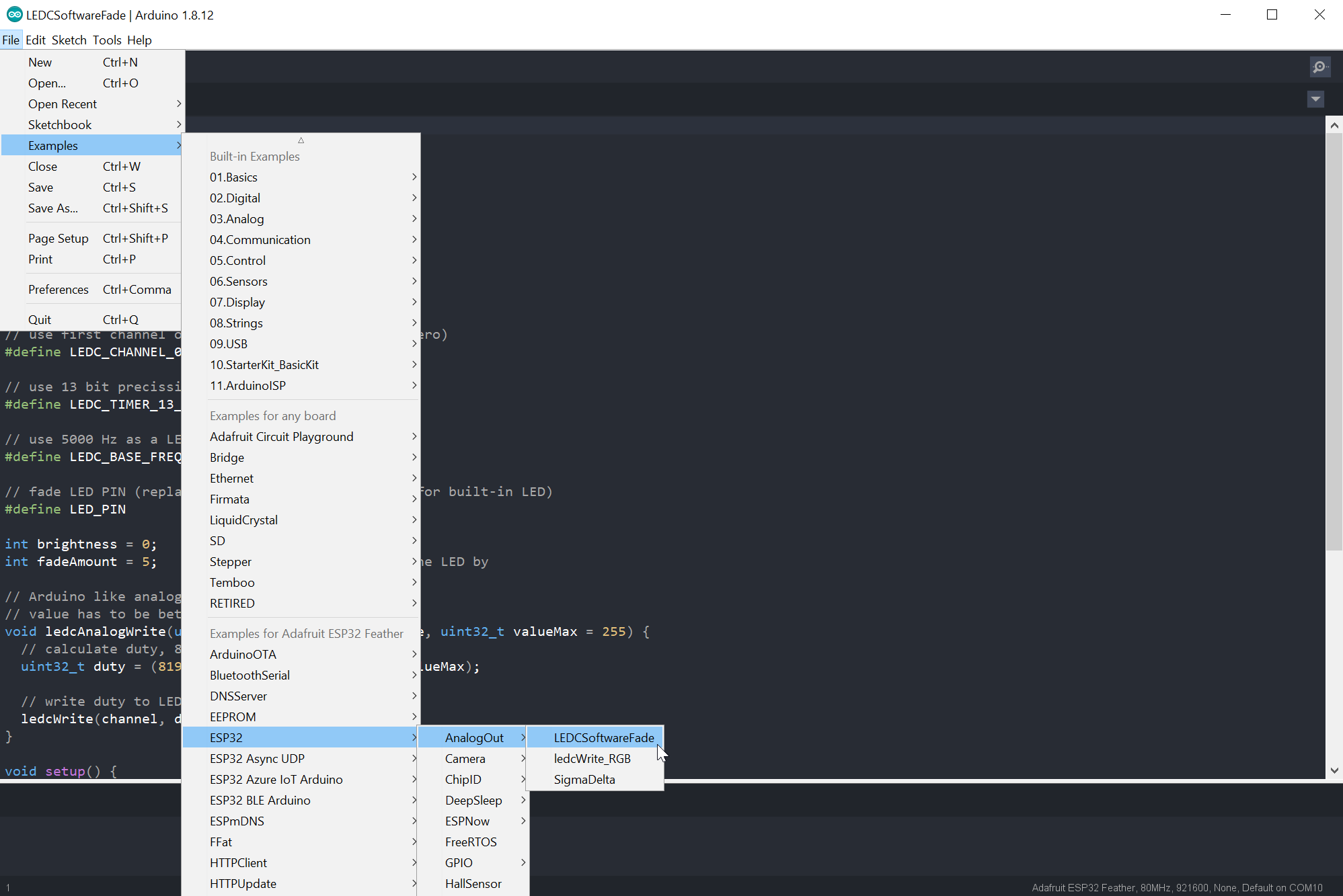 You can also access ESP32’s official fade example in the Arduino IDE by clicking on File -> Examples -> ESP32 -> AnalogOut -> LEDCSoftwareFade.

First, let’s setup some PWM constants. Feel free to play with these.

Step 2: Setup other constants and variables

Then setup the other constants and variables. This is similar to other Arduino programs we’ve written.

In setup(), we will setup a PWM channel and attach a pin to that channel.

That’s it, you can run the program! Try experimenting with different frequency and resolution values, what happens?

Our ESP32 fade code on github

And here’s our ESP32 fade code on GitHub.

In the next lesson, we will use a potentiometer to control an LED’s brightness and learn about the ESP32’s analog input.

Previous: Blinking an LED with ESP32 Next: Analog input with the ESP32