In our Ohm’s Law lesson we analyzed relatively straightforward circuits with a single resistor. These circuits helped us build a foundation for and a conceptual understanding of Ohm’s Law and how to apply it; however, most circuits are not so simple.

In this lesson, we we’re going to extend Ohm’s Law to more complicated circuits: resistors in series and resistors in parallel. In short:

For series resistors, we sum resistances to find the aggregate resistance \(R_{equivalent}\):

Yes, the parallel resistance equation is a bit enigmatic but you can derive it yourself (or even forget it all together) if you know Ohm’s Law and Kirchhoff’s Laws.

For us, the most important and useful concept to understand is that series resistors divide voltage (we’ll use this later in our microcontroller circuits) and that parallel resistors divide current (with more current flowing through branches with less resistance). The image below attempts to concisely explain this.

And, while the ability to manually understand and analyze a circuit is important in physical computing, if you become confused, you can always use a circuit simulator like CircuitJS.

Resistors in series are connected in sequence: head-to-tail.

Figure. Components are in series if they are joined end-to-end (or head-to-tail) in sequence like the above. Image on left from Khan Academy. Image made in PowerPoint.

From Ohm’s Law, we know that resistors drop voltage (indeed, the voltage drop \(V_{R}\) over a resistor \(R\) is \(V_{R} = I * R\)). Thus, multiple resistors “in a row” (in series) will each cause a drop in voltage—and the magnitude of this drop is proportional to the resistor (higher resistance, higher voltage drop).

Generally, when we are trying to analyze a circuit with multiple resistor configurations (series, parallel, or a combination), the first step is to determine an equivalent resistance. That is, how can we combine all the resistance in the circuit to a single value (called \(R_{total}\) or \(R_{equivalent}\)) that enables us to apply Ohm’s Law across the entire circuit. In the case of solving for current, this would be \(I=\frac{V}{R_{total}}\)

Let’s begin with the simplest series resistor circuit: a 9V battery with 100Ω and 1kΩ resistors in series.

Figure. A simple circuit with two series resistors (100Ω and 1kΩ) and a 9V battery. How much current \(I\) is flowing through this circuit?

Figure. To find the equivalent resistance of this circuit (let’s call this \(R_{Total}\)), we can combine series resistors by summing them.

Step 2: Solve for current I with equivalent resistance

Figure. In the image above, we solve for current with three series resistors. First, sum the resistances (because they are in series) and then use this aggregate resistance (\(R_{Total}\)) to determine current with Ohm’s Law: \(I=\frac{V}{R_{Total}} \Rightarrow \frac{9V}{3670Ω$} \Rightarrow 2.5mA\)

Check our work in a circuit simulator

We can check our work in our favorite circuit simulator, which is whatever you like. :)

I will use the open-source tool CircuitJS. The specific simulation is here.

Figure. This video shows a CircuitJS simulation of a basic three resistor series circuit. You can play with the circuit here.

The notion that series resistors split voltages is a critical concept when working with microcontrollers. So, it deserves its own emphasis.

The key thing to remember: there is a voltage drop across each resistor (this is always the case, not just in a series circuit configuration). Thus, between each resistor we have a different electric potential or voltage. And because microcontrollers “read” voltage rather than current, we can use this property to control dynamic input into our microcontroller!

Let’s go over some examples.

Example 1: Solve for voltage at VB

With this idea of voltages dropping across each resistor, let’s look at how to calculate the voltage at the node \(V_{B}\) with respect to ground (and remember, a node is just any junction point with two or more connections in a circuit).

Before moving through our example, stop and ask yourself: how would you calculate the voltage at \(V_{B}\)?

Step 1: Solve for the current through the circuit

Figure. The voltage divider pattern and equation. Image made in PowerPoint. See Khan Academy for more.

Wouldn’t it be cool to dynamically control one of those resistor values to output a variable voltage at \(V_{out}\)? Yes! And this is the basis of a potentiometer, which we will learn about in a later lesson.

Given what you are learning about circuits, you now have the knowledge to derive the voltage divider equation or, at the very least, understand how it is derived. Let’s take a look! 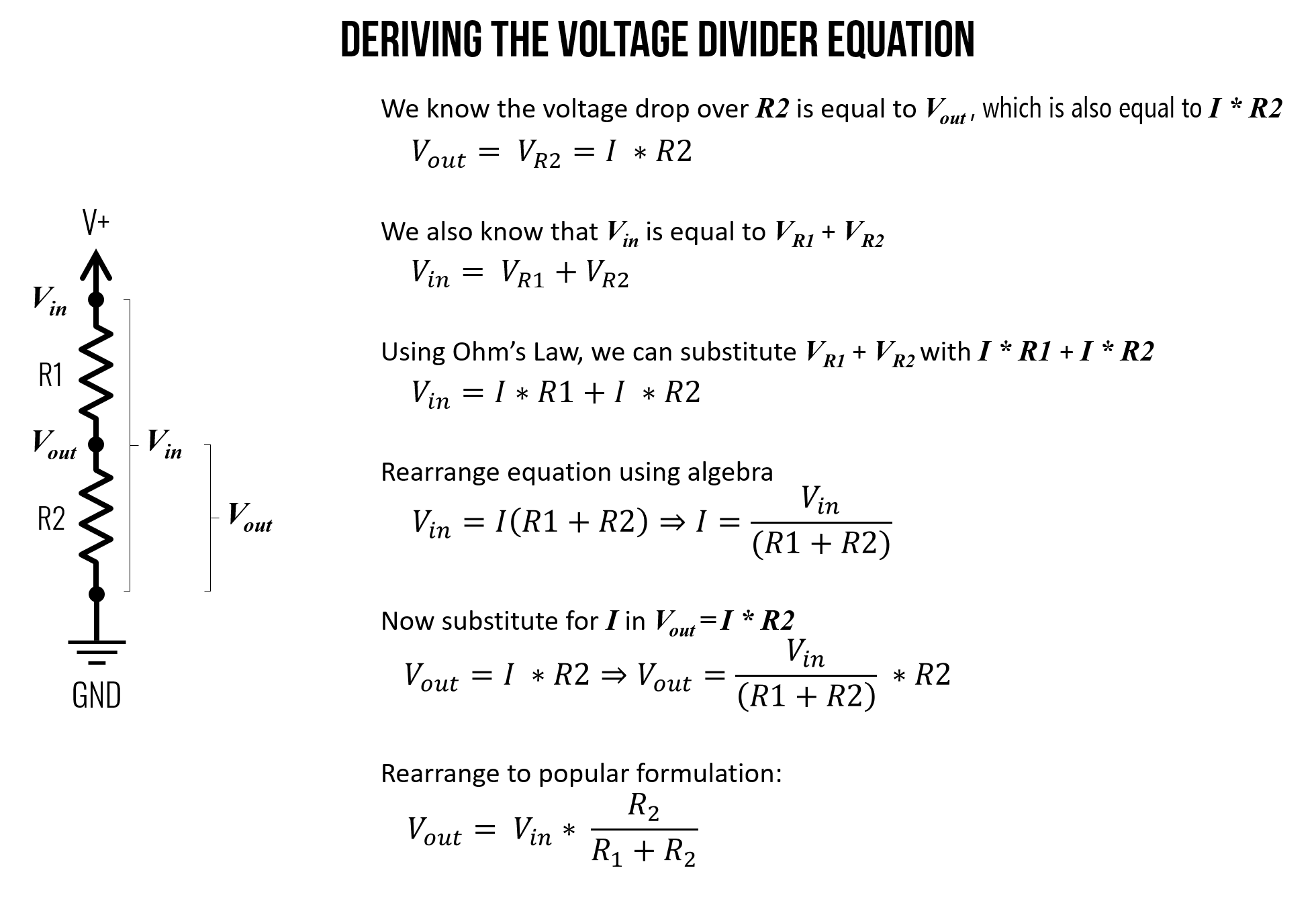 Figure. A derivation of the voltage divider equation. See Khan Academy for more.

Finally, rearrange the above to achieve the popular voltage divider equation:

Note: for this voltage divider equation to hold true, the current \(I\) flowing through \(R_1\) must be (largely) equal to \(R_2\). That is, if we hook up a branch to \(V_{out}\), as we’ve done below, then this branch must have very high resistance so that very little current “leaks” out into that branch. That is, \(R_{Load}\) must be magnitudes greater than \(R1 + R2\). However, in the case of microcontroller inputs, this is fortunately the case, which we will return to later.

Figure. The voltage divider equation only holds when \(R_{Load}\) is large, which it will be when we start using microcontrollers (which read changes in voltage levels and have “high input impedance”)

Figure. Components are in parallel if their head’s share a node and their tail’s share a node. Image on left from Khan Academy. Image made in PowerPoint.

The first thing to recognize is that \(I_{Total}\) splits into two branches. Let’s call the current down those two branches \(I_1\) and \(I_2\). From Kirchoff’s Laws, we know that \(I_{Total} = I_1 + I_2\). This is due to the conservation of energy—no charges are lost in our circuit (they simply flow around and around).

Also recognize that there are only two nodes in our circuit. We can label them \(Node A\) and \(Node B\).

Stop for a moment. Think about these results. Do they conceptually make sense?

Using Ohm’s Law, we found that 10 times as much current flows through the \(I_2\) branch as the \(I_1\) branch. Indeed, this exactly matches the ratio of the two resistors \(R_1\) to \(R_2\)—\(R_2\) is 10 times larger than \(R_1\) and thus will restrict far more current. This makes sense: just as more water will flow through a branch with less resistance, so too will more current flow through the path of less resistance.

Step 6: Use equivalent resistance to check our work

Remember how we introduced an equation for equivalent resistance in parallel resistor circuits? The equation is:

As an aside, if you’re curious about its derivation, see this Khan Academy lesson—but, in short, you can derive it from Ohm’s Law (and the steps that we followed above).

Check our work in a circuit simulator

We can also check our work in a circuit simulator. I built the same circuit in CircuitJS, which you can view here.

Does the visualization match your expectation?

Figure. This video shows a CircuitJS simulation of a basic two resistor parallel circuit. You can play with the circuit here.

Come up with two series resistor circuits and two parallel resistor circuits. Using what you’ve learned, manually solve for current in each circuit (either on pencil+paper or digitally). Show your step-by-step work. Check your work by building a simulation in CircuitJS.

In your prototyping journals, include a sketch of the circuit (can be a smartphone picture of paper+pencil), your manual work to solve for current \(I\) (again, can be paper+pencil), and a screenshot of the CircuitJS circuit along with a direct link. (Remember, you can create a CircuitJS link by going to File -> Export as Link).

In the next lesson, we will learn more about resistors, how they’re made, how to use them, how they’re characterized, and how to calculate their power dissipation.