In this lesson, you will learn about two types of magnetic sensors: Hall effect sensors and reed switches. You will then use a DRV5055 Hall effect sensor to build a simple auto-brightening LED circuit first without and then with a microcontroller.

Magnet-based sensors such as reed switches and Hall effect sensors react to the presence of a magnetic field. They are truly ubiquitous sensors found in everything from automobile control circuits and fluid control systems to electronic devices like cell phones and computers. While Reed switches are electro-mechanical: two internal contacts physically close when a properly oriented magnetic field is within range, Hall effect sensors are solid state (no moving parts) transducers: they convert magnetic energy to electrical energy and can either be used as analog sensors or switches.

A key benefit of a magnet-based sensors is that the magnet itself does not need to be powered and can even be fully encased in a moving part like a window, a wheel, a turbine, etc. For example, a bicycle tachometer works by affixing a magnet to the bike wheel (which spins) while a Hall Effect sensor or reed switch is attached to a wheel fork and used by a microcontroller to count revolutions. Magnet-based sensors are also commonly use to track rotations in DC electric motors, which already contain magnets to power the motor.

Two example bike wheel tracking systems (left and middle) along with a bike speedometer. Typically, these systems are made with Hall effect sensors or reed switches to measure wheel revolutions, which are converted to distance and speed by a small computer with a display (often mounted on the handlebars). Note: to use this system, the bicyclist must first complete a calibration step by moving the wheel a set distance (thereby providing the necessary data to convert from revolutions to distance).

Enter Edwin Hall. As a PhD student at Johns Hopkins in 1879, Hall discovered the “Hall effect”, which is the production of a small voltage difference across an electrical conductor transverse to the electric current when a magnetic field is applied (Wikipedia). This animation by “How to Mechatronics” helps demonstrate the effect. When a magnet is introduced, it repels negative charges to one side of the conductor creating an asymmetric distribution of charge (perpendicular to the flow of current) on the conductor. This separation of charge establishes a new electric field with a small electric potential (often in the millivolts), which can be measured by a multimeter or similar device.

Animation from “How to Mechatronics”

Note that though the animation appears to show the cessation of current through the conductor during the Hall effect, this is not the case. Current continues to flow even in the presence of a magnetic field. The animation also does not show that when the magnet is reversed, the Hall effect is also reversed: negative and positive charges would displace to opposite sides of the conductor (and again, this displacement is transverse to the flow of current).

To better understand the Hall effect, watch this 5-minute video from Professor Bowley at the University of Nottingham. He provides a wonderful set of visual experiments and explanations (the best we’ve seen) that should clarify things:

In this wonderful video from the University of Notthingham, Professor Bowley explains the physics of the Hall Effect.

Because a magnetic field vectors flow from a magnet’s north to south poles, magnetic flux will change based on a magnet’s orientation to the Hall effect sensor. The amount of magnetic flux is maximized when the poles of the magnet are orthogonal to the sensor. To learn more about magnetic flux, see this Khan Academy lesson.

In their handbook for Hall effect sensors, Honeywell provides dozens of application ideas: 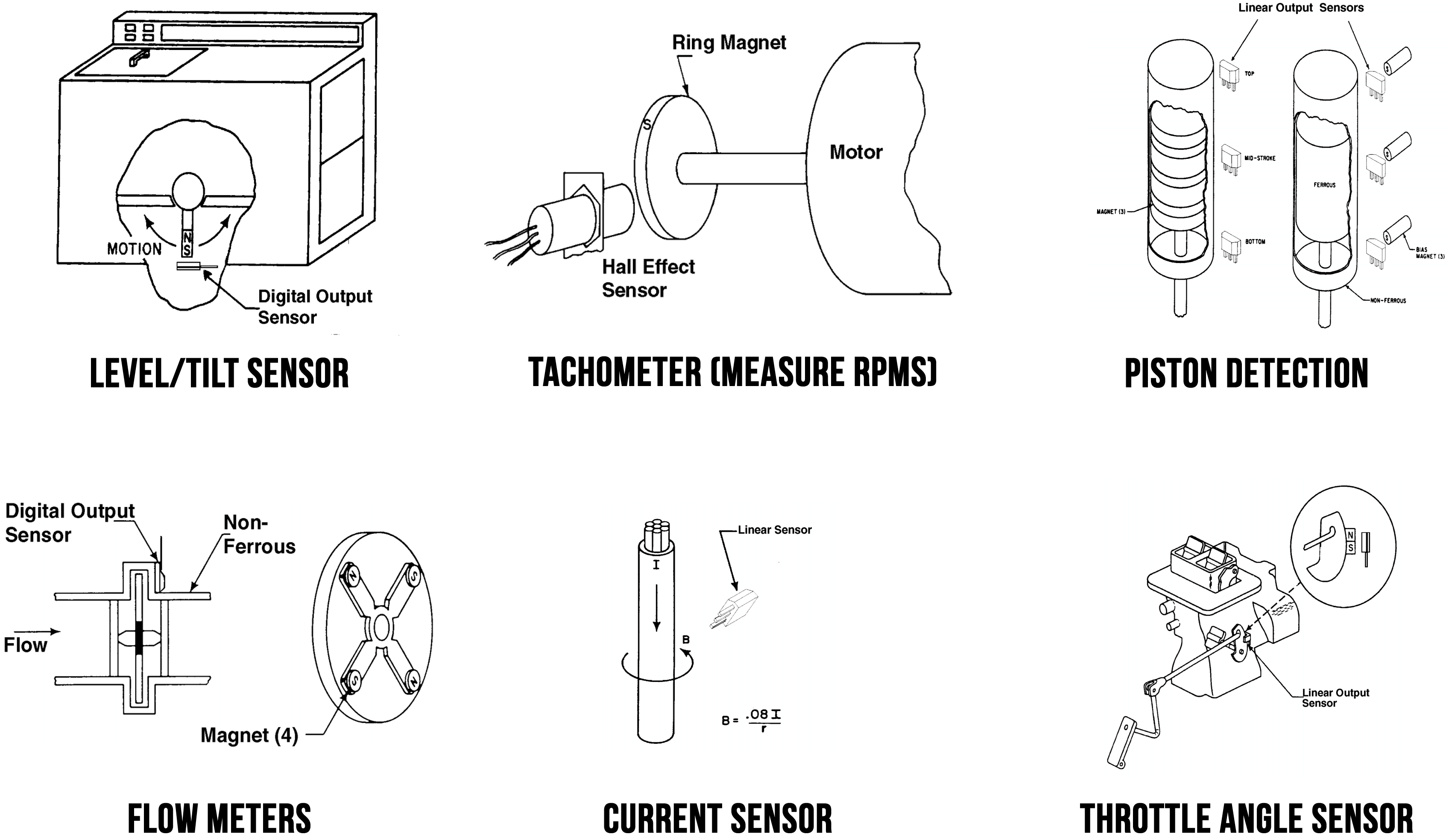 A subset of Hall effect sensor application ideas presented in the Honeywell handbook.

Hall effect sensors can provide either analog or binary output. In either case, they are active sensors with three pins (\(V_{CC}\), \(GND\), and \(Out\)).

In previous lessons, we’ve covered resistive sensors like force-sensitive resistors and photoresistors, both which change their resistance based on some external stimulus. In contrast, an analog Hall effect sensor outputs a varying voltage. This voltage is directly proportional to the sensed magnetic flux density.

To produce a binary output, these Hall effect sensors have an additional internal element called a Schmitt Trigger connected to the analog output, which converts the internal analog output signal to the external digital output (HIGH or LOW). See this video by “How to Mechatronics.”

While some Hall effect sensors produce binary output (HIGH or LOW) and thus, can function as switches, they are not to be confused with reed switches, which are electromechanical devices. With a reed switch, two ferromagnetic metal contacts close in the presence of a magnetic field (and are otherwise normally open). Because a reed switch is a mechanical device, the switch contacts can wear over time. See the animations below.

The slow-motion activation video is from Wikipedia.

A reed switch is a passive sensor: its contacts will close in the presence of a magnetic field regardless of whether it’s even hooked up in a circuit. Unlike Hall effect sensors, reed switches are not sensitive to magnetic field polarity; however, the magnetic field has to be parallel to the reeds—either north-to-south or south-to-north. See figure below. 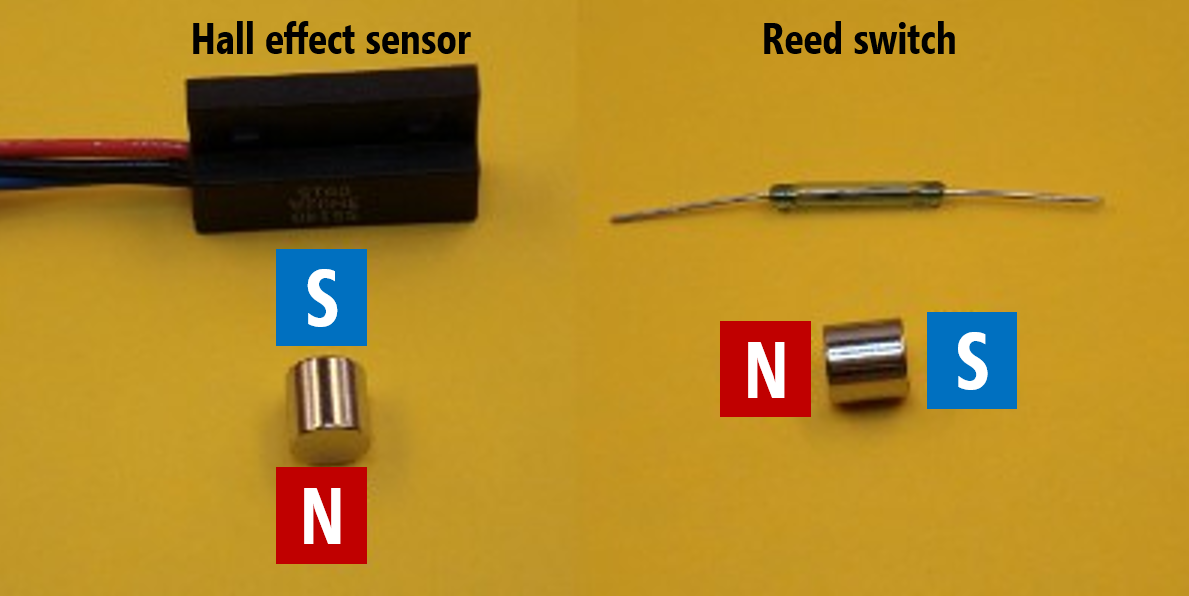 The DRV5055 can operate with both 3.3V and 5V power supplies (with +/- 10% tolerance). The sensor can be sampled at 20kHz. To provide a reliable voltage output across a range of deployment conditions, the DRV5055 chip includes temperature compensation circuits, mechanical stress cancellation, signal conditioning, and amplification. So, while small, there is a significant amount of sophisticated hardware packed into this piece of hardware.

Two packages are available: a surface-mount package SOT-23 (left diagram below) and a through hole package TO-92 (right). We will be using the through-hole package (TO-92).

*TI recommends connecting Leg 1 to a ceramic capacitor to ground with a value of at least 0.01 µF. This is called a decoupling capacitor (or bypass capacitor) and is a common addition to help smooth the voltage supply as the sensor is operating. See wiring diagram below. While not absolutely necessary—and some of you may not have access to ceramic capacitors—it’s recommended (it will improve performance and reliability). To see the effect of adding a decoupling capacitor on a voltage supply to a chip, see this video. Dave Jones at the EEVblog also provides a nice whiteboard lesson (link).

We’ve included two equivalent Arduino wirings. The left diagram includes a breadboard, which we felt may be a bit confusing to those still becoming familiar with breadboards. The middle diagram is the same wiring but without a breadboard. The schematic on the right is copy/pasted directly from the DRV5055 datasheet.

When no magnetic field is present, the analog output drives half of \(V_{cc}\). So, on an Arduino Uno, analogRead(A0) would return 512 (1023/2) in the default state (with no magnet present). The sensor’s output will then change linearly with the applied magnetic flux density. If the south pole of the magnet is facing the sensor, the analog output will increase between \(V_{cc}/2\) - \(V_{cc}\). If the north pole faces the sensor, the output will decrease from \(V_{cc}/2\)) to 0V. See the magnetic response graph below and Section 7.3.2 of the DRV5055 datasheet.

The magnetic response graph for the DRV5055 Hall effect sensor. The diagram on the right shows a magnet’s south pole orthogonal to the sensing surface, which would result in a positive \(\vec{B}\) and an analog output voltage > \(V_{cc}/2\). If the magnet’s orientation is flipped such that the north pole is facing the sensor, then the \(\vec{B}\) will be negative and the analog output voltage will range between 0 and \(V_{cc}/2\).

First, we’re going to use the Hall effect sensor in a “bare bones” circuit without a microcontroller and then we’ll show how to use the sensor with Arduino.

Even with this simple circuit, there are many creative possibilities: imagine a Harry Potter light that only turns on when a wizard’s wand is close (the light would contain a Hall effect sensor and the wand a magnet).

We’ve included two wiring diagrams: on the left, the suggested wiring by the DRV5055 datasheet with the decoupling capacitor and, on the right, the same wiring but without the capacitor. Both will work similarly for our purposes here, so if you don’t have a capacitor handy, just make the circuit on the right.

And here’s a workbench video demonstrating the circuit (without a capacitor). The second half of the video includes two multimeters: one to measure the current through the circuit and the other to measure the voltage output from the Hall effect sensor.

My vocal narration is quite soft as I recorded the video early in the morning and did not want to disturb my house! :D

What if we wanted to supply more than 1mA through our LED? We have have two choices:

Let’s adapt our circuit to use the Arduino. We’ll make one circuit to read the Hall effect sensor on A0 and another circuit to turn on and auto-brighten an LED using PWM (via GPIO Pin 3).

One simple modification you may want to try: when no magnet is present, make the LED off. When either the south or north magnetic field poles are sensed, brighten the LED accordingly.